Paraprosdokian –  a rhetorical term for an unexpected shift in meaning at the end of a sentence, stanza, or short passage; a figure of speech in which the latter part of a sentence or phrase is surprising or unexpected; frequently used in a humorous situation.

“I am proud of what the University has achieved under my leadership. It has been a fabulous three years and Lincoln is on track to become one of the world’s truly great land-based universities”, said Dr West.

“However my commitment of time, energy and focus has been so great that it is now appropriate that I refocus on my family that live in the Waikato and on my very elderly parents that live in England”, Dr West added.

It is the first time in the five years since the award was established that a North Island farming business has won.

The Fords were presented with the Gordon Stephenson trophy by Primary Industries Minister Nathan Guy at a Parliamentary function.

The judges said the sheep and beef property had the “wow” factor and had been chosen from out of 10 regional supreme winners. It stood out in terms of environmental sustainability and impressive production and performance figures, they said. . .

A sheep & beef farmer has been formally warned for breaching the Resource Management Act by exceeding a nitrogen discharge cap on properties in the Lake Taupō catchment over a two year period.

It is the first warning issued by Waikato Regional Council under the new Variation 5 consenting regime designed to protect the lake’s health from nitrogen, which can leach into waterways and cause nuisance algae.

The warning came after it was discovered more than a tonne of excess nitrogen could eventually leach into the lake as a result of the farmer’s operations over the two years. By themselves the breaches are not expected to have a major detrimental effect on the lake’s future health. . .

Look at it as a challenge – Bryan Gibson:

The line painted on Rob Craig’s haybarn, marked 2004, is a reminder of the devastating floods of a decade ago.

But heavy rain is often enough to jog Craig’s memory, as it did last weekend.

“I didn’t sleep well on Friday night, to be honest. It was bucketing down with rain. Ever since ’04 it’s always in the back of your mind when it’s raining heavily. It just kept raining and raining and I got a pretty bad feeling then that it was going to be bad.” . . .

A rich snow harvest in the Fairlie basin is providing an unexpected windfall for lowland farmers needing Lake Opuha to fully recharge for the next irrigation season.

After being closed to irrigating in February the lake reached “zero storage” for the first time in 17 years and had been slow to return to its normal levels over autumn.

The lake will be boosted by the initial snow melt in the lower basin with lake levels expected to continue rising as deeper snow in the Two Thumb Range thaws in spring, but more water is needed for it to totally refill. . .

(BusinessDesk) – New Zealand’s 2014/15 wool season ended this week with what is expected to be the smallest percentage of the clip sold through auctions in at least seven years, as more farmers were attracted to the premium prices and protection from commodity price volatility offered in private sales.

The auction system’s share of wool is expected to continue to shrink. An estimated 464,000 bales are expected to come up for auction in the 2015/16 year, down from 480,000 bales in 2014/15 and 493,000 bales in 2013/14, according to Wool Services International executive Malcolm Ching, who is on the roster committee which estimates wool bale supply for the auctions. Ching said the committee has been forced to revise down its estimates in recent years to reflect declining sheep numbers and an increased amount of wool circumventing the auction system. . .

Flag of the day

The Flag Consideration Panel is inviting people to upload designs for a new flag.

There are more than 4000 in the gallery.

This is Maori Fern Flag by Mya Charlton: 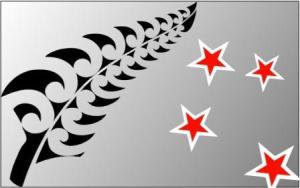 Saturday’s soapbox is yours to use as you will – within the bounds of decency and absence of defamation. You’re welcome to look back or forward, discuss issues of the moment, to pontificate, ponder or point us to something of interest, to educate, elucidate or entertain, amuse, bemuse or simply muse but not to abuse.

The truth about success.

People see the tip of the iceberg  – success.

1967 The world’s first ATM was installed in Enfield, London.

2008 – In a highly-scrutinised election President of Zimbabwe Robert Mugabe is re-elected in a landslide after his opponent Morgan Tsvangirai had withdrawn a week earlier, citing violence against his party’s supporters.