Bringing a steam train from Dunedin was a popular idea with the 400 seats on offer snapped up by people keen to enjoy the journey and the destination.

When I went into Oamaru around midday yesterday businesses in the town’s historic precinct was ready and waiting for the passengers.

But while the idea was popular it wasn’t such a good one in the middle of a very dry summer.

Firefighters are battling a cluster of large scrub fires stretching for kilometres south of Oamaru.

The fires, which began about 2.30pm, were believed to have been sparked by a vintage steam train on an excursion from Dunedin, passengers on board said. 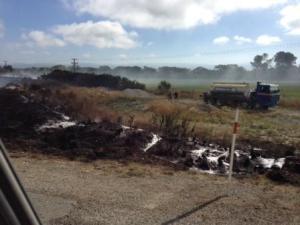 There were four helicopters by late afternoon and friends were busy dampening down hot spots on their boundary and spraying canary seed to keep it wet. 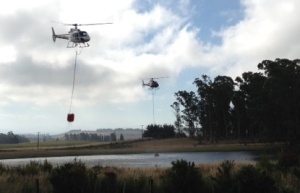 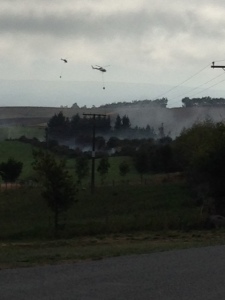 The worst appears to be over now but it will be a nervous night for people near the line.

Stuff has more on the story and photos here.

Quiff – a piece of hair brushed upwards and backwards from a man’s forehead;  a prominent forelock; clever trick, ploy, or stratagem to achieve a desired end, especially by unorthodox, irregular, or time-saving means; a dodge; a tip.

Three little pigs went out to dine at a restaurant.

The waiter greeted them and asked what they’d like to drink.

The first pig orders a pinot noir, the second pig opted for a beer, and the third pig ordered a large water, with no ice.

The waiter brought their drinks and took their orders for entrees.

The first pig chose whitebait, the second pig ordered scallops, and the third pig asked for another large water, with no ice.

The waiter took their orders for mains.

The first pig opted for warm lamb salad. Pig number two ordered blue cod with chips and the vegetable of the day. The third pig ordered another large water, without ice.

When the waiter cleared their plates he brought the dessert menu. The first pig ordered strawberries and  ice cream. The second pig ordered pavlova with fruit salad. The third pig repeated his order for a large water without ice.

When the waiter came back later to clear their plates and hand them the bill his curiosity got the better of him and he said to the third pig, “Excuse me sir, I can’t help wondering why when you’re here with so much fine food to choose from, all you’ve ordered is large glasses of water with no ice?”

The third pig sighed and said, “I drew the short straw and I’m the one who has to go wee-wee-wee all the way home.”

Saturday’s soapbox is yours to use as you will – within the bounds of decency and absence of defamation. You’re welcome to look back or forward, discuss issues of the moment, to pontificate, ponder or point us to something of interest, to educate, elucidate or entertain, amuse, bemuse or simply muse, but please not abuse.

1978 Soviet satellite Cosmos 954, with a nuclear reactor on board, burnt up in Earth’s atmosphere, scattering radioactive debris over Canada’s Northwest Territories.
1980 – The ambassador of the Soviet Union, Vsevolod Sofinsky, was ordered to leave New Zealand for giving money to the pro-Soviet Socialist Unity Party.

2009 – The storm Klaus made landfall near Bordeaux. It subsequently caused 26 deaths as well as extensive disruptions to public transport and power supplies.

2014 – Three bombs exploded in the Egyptian capital, Cairo, killing about 7 people and injuring over 100 others.

2014 – The Philippines and the Bangsamoro agreed to a peace deal that would help end the 45-year conflict.