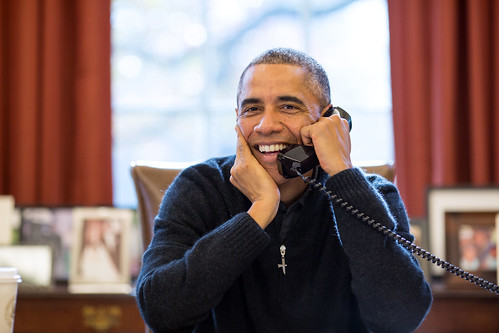 This is publicity money can’t buy for the company which is understandably delighted at the unintentional endorsement:

Christchurch clothing brand Untouched World is bracing for a surge in sales after United States President Barack Obama was photographed wearing one of their jumpers in the White House Oval Office.

Mr Obama donned the dark grey merino and possum-blend pullover as he made Thanksgiving Day phone calls to US troops and service members from behind the most famous desk in the US.

“What’s really nice about it is that it’s something he’s gotten up in the morning and chosen to wear, so it’s really cool,” she says.

She believes the sweatshirt, which retails for NZ$399, was given to Mr Obama by Prime Minister John Key when Mr Key visited the White House in June. . .

Mr Obama is the second US President to be pictured in Untouched World clothing. Bill Clinton has been a fan ever since being given one of the brand’s jackets at the APEC conference in Auckland in 1999. . .

Merino and possum is warmer than wool by itself, it’s soft, silky and wears well.

I’ve owned a jumper similar to the one the president is wearing for several years. In spite of many wears and several washes it still looks good.

This entry was posted on Saturday, November 29th, 2014 at 9:00 am and is filed under business, fashion, trade. You can follow any responses to this entry through the RSS 2.0 feed. You can leave a response, or trackback from your own site.