The Taxpayers’ Union has updated its Bribe-O-Meter to include four of the wee parties:

The Taxpayers’ Union have added the Green, ACT, United Future and Conservative Parties to the ‘Bribe-O-Meter’ hosted at taxpayers.org.nz.  Excluding ACT and New Zealand First, the total election ‘bribes’ – that is new spending not already in the budget covering the next parliamentary term, equals $12.7 billion, or $7,486 per household.

Jordan Williams, Executive Director of the Taxpayers’ Union, says, “The Bribe-O-Meter is enabling Kiwis to judge for themselves the various bribes this election. With the addition of the minor parties voters can assess which political parties are offering taxpayers value for money.”

A lack of detail in New Zealand First’s policy documents has made it impossible for the Union’s independent expert, Dr Michael Dunn, to calculate credible figures for the Party’s inclusion in the Bribe-O-Meter.  Public and private requests to New Zealand First have, to date, not resulted in amelioration.

If someone who used to do social policy costing for IRD can’t figure out NZ First’s costs, the problem is with the party and its policies.

Mr Williams says, “While National, Labour, the Greens, Conservatives, ACT, and United Future have provided the Union with sufficient policy and financial material to estimate the cost of their election manifestos, New Zealand First apparently just doesn’t have the information for our expert. It appears that Mr Peters makes promises to all and sundry, but no one at his office is adding up the cost.”

“We are delighted that in the last week, parties have come to us to test our expert’s assumptions and the Bribe-O-Meter’s methodology. On the basis of new information that parties have provided we’ve updated our figures and are able to provide more transparency to the voting public on precisely what parties are promising.” . . 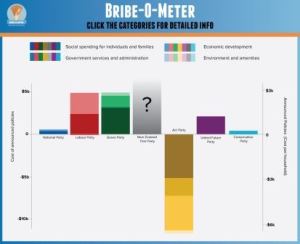 This puts the lie to claims by Labour and the Green Party that they will be fiscally responsible.

NZ Firsts costs are a like its leaders utterings – whatever he thinks it is.

Labour and Green Party policies are already at 7482.68 billion.

That doesn’t take account of the cost NZ First and Internet Mana would require for their support.

Nor does it take into count the added costs of higher taxes, higher interest rates, higher inflation, more welfare and a stalled economy.

This entry was posted on Monday, September 1st, 2014 at 10:23 am and is filed under politics. You can follow any responses to this entry through the RSS 2.0 feed. You can leave a response, or trackback from your own site.