Labour could hardly contain its glee at the drop in the prices in yesterday’s GlobalDairyTrade auction:

“Since February, milk prices have collapsed by 41 per cent, which suggests the short-lived economic recovery may have already ended. . .

“New Zealand is too reliant on one industry – riding the wave of commodity prices is not a long-term solution to grow jobs and incomes. . .

But while crying crocodile tears over the milk price it was announcing a tax that will hit dairy farmers:

. . . “We believe that the use of water for irrigation is a privilege, not an inalienable right. A resource rental is the best tool for making sure fresh water is used efficiently. However we will support proposals for water storage and irrigation schemes provided they have a broad consensus from their communities.

“Labour will use resource rentals to pay for irrigation schemes rather than paying for them out of tax and asset sales. . .

Individuals and communities already have a say in any water storage and irrigation schemes through the resource consent process.

The initial stages of any irrigation scheme are the most expensive for irrigation companies and water users.

Resource rental is just another name for another tax which will  add costs without benefits, make irrigation schemes less viable, production more expensive and lead to increases in food prices.

The Green Party was equally quick to seize on the fall in dairy prices for political purposes:

Falling dairy prices are highlighting the danger of National’s economic strategy that focuses on the export of a few, simple commodities, the Green Party said today. . .

“National has bet the farm on the farm and it isn’t working. A growing reliance on one or two commodity exports has made our economy more vulnerable to commodity price swings. . .

Both parties either don’t understand or are ignoring the fact that the increase in dairying had nothing to do with government policy.

Farmers made individual decisions on converting farms in response to market signals.

They did so in the knowledge that in the market prices go up and they go down.

They went up last season because demand was high.

They are going down now because supply has increased.

Both parties are also conveniently ignoring the statistics. 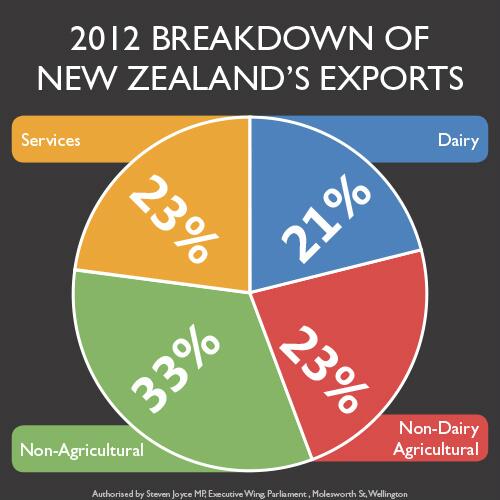 Dairy is important but it accounted for only 21% of our exports in 2012 and has gone up only a little since then.

The risk for dairy isn’t current government policies but those a Labour/Green government would impose including a carbon tax:

. . . Agriculture – which is currently exempt from the ETS – would pay a reduced rate of $12.50 per tonne. This works out as an 12.5 per cent hit on farmers’ income. This includes 2 per cent on the working expenses of the average farm. A Berl Economics report, released with the policy, said dairying will be ”adversely affected.”

But it adds: ”However, at the currently projected pay-out for milk solids, even dairy farms in the lowest decile would remain well above break even in the face of an emissions levy.” . .

That payout projection is much lower now.

When he announced the policy, Norman said dairy farmers could afford it.

It wouldn’t be wise to hold your breath while waiting for him to axe that tax because they can’t afford it now.

Labour and the Greens are simply anti-dairy.

They are vociferous about the costs, ignore the benefits and take no notice of the efforts farmers are making to protect and enhance water and soils.

This entry was posted on Thursday, August 7th, 2014 at 9:09 am and is filed under business, environment, Farming, food, politics, rural. You can follow any responses to this entry through the RSS 2.0 feed. You can leave a response, or trackback from your own site.