Electoral law permitted election hoardings to be displayed from yesterday.

Alfred Ngaro’s National Party teams were so keen to paint the Te Atatu electorate blue they started at midnight.

Facebook and Twitter showed MPs, candidates and supporters the length and breadth of the country erecting hoardings and  enjoying themselves while doing it.

Labour teams could be forgiven for not being quite as happy in their work but that’s not the only contrast between the blue hoardings and the red ones.

The message from National is clear and consistent, the one, or should that be ones from Labour are not.

We passed this double-sided hoarding on the way home from Queenstown yesterday. 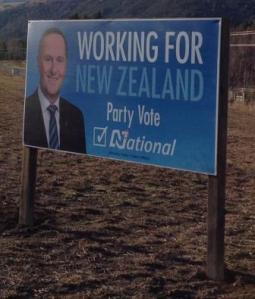 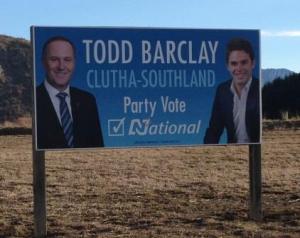 There’s two sides to the sign but a single message – party vote National.

Labour candidates are giving mixed messages – some are seeking the electorate vote over the party one, a lot of them – like those used in 2011 – don’t show their leader.

The contrast couldn’t be greater.

There are blue hoardings giving a consistent message of unity, support for party leader John Key, and  being quite clear that National wants your party vote. Then there are red ones giving mixed messages which show disunity and leave voters in doubt exactly what they’re being asked to do.

It’s the party vote that counts for forming a government.

But the hoardings of at least some Labour MPs show they’re more concerned about their own seats than the fate of their party – their desire to be in parliament is greater than that to have Labour in government.

If Labour MPs and candidates don’t care about the party vote, why would voters?

This entry was posted on Monday, July 21st, 2014 at 9:00 am and is filed under politics. You can follow any responses to this entry through the RSS 2.0 feed. You can leave a response, or trackback from your own site.

3 Responses to Two sides one message