This is an attempt to replace Dr Bryce Edwards’ daily political round-up while he’s taking a break.

I’m not pretending to be balanced.

While I link to a range of news stories, the blogs I link to are usually from the centre to the bluer end of the political spectrum or the more reasonable or witty bits of the pink to red end.

You’re welcome to leave links to other news and blogs in comments.

TVNZ – Groser – Government may not seek bipartisan support for TPP

Inventory 2 @ Keeping Stock – Another SMOG from guess who?

Matthew Beveridge – It isn’t the crime, it is the cover up: Tamati Coffey

David Fisher @ NZ Herald – Horan: our side of the story

Cameron Slater @ Whale Oil – If you are an MP, the small laws are really just suggestions

When Gerald Hargreaves took over the family farm from his father in the 1970s, he wasn’t very interested in the Angus stud his father had established in 1954. But a comment reported back to him by a friend fired him up.

“My father gave me some cows and I wasn’t really interested in the stud to be honest and I sold them, but thought I’d better not sell my father’s,” Hargreaves says.

“One of the opposition breeders said, ‘He probably doesn’t know what he’s doing, he should have sold the lot’. I said, ‘stuff you’ – it took someone to challenge me.” . . .

Kiwifruit marketer Zespri has noticed a remarkable turnaround in the mood among growers coming to the national agricultural Fieldays at Mystery Creek this year.

Zespri grower and government relations manager Simon Limmer said a lot of kiwifruit growers were calling into its site, and the contrast with the past few years as they battled the PSA bacteria scourge could not be more striking.

“The mood is very positive, very optimistic, and on the back of three years of real uncertainty and a certain sense of desperation as to where this industry was heading – it’s a really good place to be,” Mr Limmer said.

“Growers are feeling positive the PSA situation looks to be manageable, we’re seeing volumes of gold kiwifruit recovering heading into the market – market returns are up across all varieties. . .

Forestry company HarvestPro has been fined $80,000 and ordered to pay reparations of $40,000 after one of its workers was hit by a log weighing more than a tonne.

Tau Henare was working on a logging operation at Whakaangiangi on the East Coast when the incident occurred in September 2012. His job was to attach strops to fallen logs, which were then dragged up a hillside to be prepared for transport away from the forest.

Mr Henare was hit by a log that had come lose from the jaws of a loader on a landing above and slid down a steep hillside. He suffered fractures to his arm and leg that have required multiple surgeries and left him unable to work. . .

How to calculate the maximum number of hours an employee can work during calving and mating –  John Brosnan:

Over the last year or so there has been a lot of discussion in the media around farm practices in relation to keeping wage records, hours worked on farms and in particular employees not earning minimum wage within their pay period.

This was not helped by rumours that MBIE (the Ministry of Business Innovation and Employment) were going to treat an accommodation allowance as a part of salary/wages differently from how IRD have traditionally viewed it. . . .

Work to extend the existing UHT building and install a new pasteurising, sterilising and palletising line as well as a new 250ml high-speed filler is expected to be completed by October 2015 and will boost production at the site by 50 percent, enabling it to process an extra 32 million litres a year, Sydney-based Goodman Fielder said in a statement. . .

Fun side of farming:

In just a few short weeks rural youth will be out in full force trying to prove they’ve got what it takes to be the 2014 AgriKidsNZ and TeenAg Champions.

Close to seven hundred primary and secondary aged students battled it out in the seven Regional Finals across the country earlier this year. The top three teams from each region progressed through to the Grand Finals, set to be held alongside the ANZ Young Farmer Contest in Christchurch, 3-5 July.

“These students have been preparing for months,” said Josie Hampton AgriKidsNZ & TeenAg Project Leader. “They pour everything they’ve got into this competition and it’s quite an honour for them to represent their schools at Grand Final.” . . .

Long established New Zealand carpet maker Cavalier Bremworth has launched a quirky new ad campaign which focuses on its unique ability to manage the quality of its wool carpet from the farm right to the floor. It’s also a celebration of having Kiwis on the job every step of the way.

The hero of the campaign continues to be its animated sheep (Wool-i.am) who takes a journey with the wool from the farm to its tufting plant in Auckland. Cavalier Bremworth, as part of parent company Cavalier Corporation, is the only carpet maker that owns and controls the whole process for wool carpet production – it owns a wool buying business, a half share in the country’s biggest wool scours in Canterbury and Hawke’s Bay, and then its own dyeing and spinning plants in Napier, Wanganui and Christchurch. . .

Eric Hill, who has died aged 86, was one of those unusual and fortunate people whose first book was not only an immediate success but also became a staple of children’s bookshelves for decades. Where’s Spot?, a simple lift-the-flap picture book with a lovable puppy at the heart of every picture, was published in 1980. Within weeks, it was a bestseller, taken to the hearts of pre-schoolers and their parents across Britain. . .

Not just across Britain, or even the English-speaking world.

I know a wee girl in Argentina who also loves the books.

The kind people at Story People will send you a daily does of whimsy by email if you sign up on the page linked to above.

Rodney Hide reminds us that H is for Harawira, Harre and hypocrisy:

I used to think politics was all about achieving good government. That proved invariably disappointing. These days, politics is no longer my responsibility. I’m happy if it just proves interesting.

That’s why I am for the Internet-Mana Party. They’re the best entertainment in years. If they were a parody they would be too improbable to be believed.

Maori nationalist Hone Harawira calls Pakeha the rudest of names and the wrong colour to date his daughter. But he’s jumped into bed with whiter-than-white Kim Dotcom.

Harawira trumpets Mana and His People but that’s not stopping him using his electorate to coat-tail Dotcom’s party into Parliament. His price? $3 million.

It’s easy to accuse Harawira of hypocrisy but he has a ready reply: it’s a lot of money. At $3m his double standard is good and high.

That raises two questions – could he be bought for less and what would he do for more?

Laila Harre wasn’t elected leader of the Internet Party. She was hired. She’s been selected and paid for by Dotcom. The former coffee picker for the Sandinistas is New Zealand’s first corporate-hire political leader.

A mate rang after Harre’s appointment splitting his sides, “All they need now is Pam Corkery”. Corkery was appointed press secretary that day.

Willie Jackson considered standing but wanted $250,000. That’s his price for standing up for his principles. . .

That raises a question about principles that can be bought – if the buyer doesn’t like them, would the seller come up with others that might attract the right price?

And what will happen if the buyer isn’t satisfied with his purchase?

. . .  Dotcom set out to destroy Banks for not rushing to rescue him from Mt Eden Prison. He expected a minister to jump for a $50,000 political donation. That’s his character. Imagine what he expects for $3m.

And imagine how he will perform when he doesn’t get it. Pure entertainment.

It would be if the potential consequences weren’t so serious.

The election outcome is on a knife-edge and the country will be left cut and bleeding if Dotcom and his hired hypocrites have any power.

Dunedin’s Octagon was a sea of black with a very few splashes of red and white before last night’s game.

The sell-out crowd at the Forsyth Barr stadium was also showing its true colours were mostly shades of black.

Before the kick-off the mood was buoyant. The crowd quietened somewhat as England scored the first points and by half-time with the score at 10-6, with the All Blacks behind, there was a fair degree of nervousness.

However, it looked like a different team in the second half and when Ben Smith touched down for his first try as an All Black in front of his home crowd, and put the ABs in front.

He’d been equally as impressive in the first half with sprint half way up the field which ended in a try-saving tackle.

Tries by Ma’a Nonu and Julian Savea followed and with minutes to go the score was 28-27 but England managed a late try.

The All Blacks have already won the three-match series, the Steinlager Cup and the Hillary Shield. 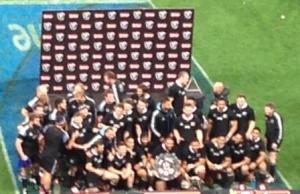 But if this is the second-string English team it was described as before the tour, the All Blacks have a lot of work to do.

They won’t be wasting time admiring the silver-ware, they’ll be preparing for another hard test next week.

And that one won’t be played in nearly as good conditions for the teams, or spectators, as last night’s thanks to the stadium roof.