Deliciate – to delight oneself; to indulge in feasting, to revel.

How much do you hate people?

You only sort of hate people. Sometimes. When they’re being the worst. And that’s perfectly natural. You don’t put up with any nonsense but you’re probably not a dick.

There’ times I prefer fewer people and sometimes enjoy none at all but I don’t think I’m guilty of misanthropy.

Some politicians and lobby groups hell-bent on making farming a feature of the 2014 general election will be taking names and counting numbers.  Yet if you search online with the words “big targets,” you’ll find the banks are in the gun in the United Kingdom while across the ditch, it is tax cheats.

In the universe which is the European Union, its Climate Commissioner has challenged other carbon emitters to follow its lead.  Those big target emitters are the United States, who contribute 15.6 percent of global emissions and this surprised me, China, which is now up to 23.6 percent.  Then again, a fair chunk of humanity and the global economy resides there and in the other big target emitters; Russia, India, Brazil and Indonesia.

Speaking of Russia, I guess Vladimir Putin has made himself a big target for his ‘hostile takeover’ of the Crimea.  While the west rattled less its sabres and more its teacups,you’ve got to wonder if Putin is reassembling old Russia in some kind of geopolitical Lego.

While the South Island’s West Coast bore the brunt of former Cyclone Ita’s wrath, the defining image is that taken by the Otago Daily Times, of past Federated Farmers North Otago provincial president, Robert Borst, using his digger to rescue a motorist trapped by rising floodwaters.

“This is one of the worst storms I can recall,” says Katie Milne, Federated Farmers West Coast provincial president and the Federation’s adverse events spokesperson.

“Federated Farmers is working with the West Coast Rural Support Trust and we’d like to ask the media to help us in spreading the Trust’s direct telephone number to affected farmers: 03 738 0038.  I need to stress this applies to the West Coast only.

“Getting the Rural Support Trust’s number (03 738 0038) out there is particularly important to beef farmers or graziers who may be struggling. . . .

Septoria tritici blotch (STB), or speckled leaf blotch, the principal disease affecting NZ wheat crops over the past four years, has developed resistance to the fungicide group that has been most effective in controlling it.

A research team led by Dr Suvi Viljanen-Rollinson, from Plant and Food Research at Lincoln, working with scientists at Rothamsted in the United Kingdom and Aarhus University in Denmark, has confirmed resistance by the NZ zymoseptoria tritici population to quinone outside inhibitors (QoIs), a fungicide group commonly referred to as the strobilurins. . . .

“While improvements in water quality aren’t able to be measured overnight, we are seeing a downward trend already in nutrient and e-coli levels. With 93 percent compliance and climbing in the Manawatu-Wanganui Region, this improving trend will only continue.

“What we can measure is the actions of our community and the numbers are so encouraging it’s something the farming community can take pride in. Well over 100 kilometres of waterways have been fenced, over 60,000 plants planted for erosion control and riparian margins, as well as farm plans and mapping well under way. . . .

“The new Game Animal Council is about giving hunters of deer, thar, chamois and pigs an active voice in the management of their recreation. These appointments include a diverse range of interests in hunting and a geographic spread across the country,” Dr Smith says.

Thomas J. Sargent delivered a graduation speech at his Alma Mater, University of California at Berkeley:

Economics is organized common sense. Here is a short list of valuable lessons that our beautiful subject teaches.

1. Many things that are desirable are not feasible.

3. Other people have more information about their abilities, their efforts, and their preferences than you do.

4. Everyone responds to incentives, including people you want to help. That is why social safety nets don’t always end up working as intended.

5. There are tradeoffs between equality and efficiency.

6. In an equilibrium of a game or an economy, people are satisfied with their choices. That is why it is difficult for well-meaning outsiders to change things for better or worse.

7. In the future, you too will respond to incentives. That is why there are some promises that you’d like to make but can’t. No one will believe those promises because they know that later it will not be in your interest to deliver. The lesson here is this: before you make a promise, think about whether you will want to keep it if and when your circumstances change. This is how you earn a reputation.

8. Governments and voters respond to incentives too. That is why governments sometimes default on loans and other promises that they have made.

10. When a government spends, its citizens eventually pay, either today or tomorrow, either through explicit taxes or implicit ones like inflation.

11. Most people want other people to pay for public goods and government transfers (especially transfers to themselves).

12. Because market prices aggregate traders’ information, it is difficult to forecast stock prices and interest rates and exchange rates.

When asked whether she is worried that the Labour party might take a large portion of the Maori Party vote , she said, ‘I think that our people have to ask themselves that for all the years that Labour were in government, the nine years of plenty, what is it that changed in their lives? What is it that Labour did that made them feel that things had changed for them, and have made a difference?’ . . .

The answer to that question is not much.

The Maori seat enabled Labour to take Maori for granted.

The progress report at the end of 2012 showed:

There have been several more settlements since then, including settlement of the last of the historic South Island claims.

But it’s not just Treaty settlements which make Maori better off with a National-led government than a Labour-led one.

National knows it’s better to help people become independent and move from grievance to growth, not just in economic measures but in social ones too.

Hunters who converged on Central Otago for the annual Great Easter Bunny Hunt were down on their luck this long weekend.

Together they bagged 7700 bunnies – less than half of last year’s total.

Organisers say a shortage of farm blocks to shoot on meant 20 teams had to be balloted out of the competition.

Many farmers whose land is usually used for the shoot chose to head to the nearby Warbirds Over Wanaka event instead – and less land meant fewer hunters were allowed into the event.

“There’s so much going on in Central Otago this weekend we really struggled to get a lot of people on board,” says convenor Dave Ramsay.

Hunters worked through the night to bag as many rabbits as possible, before bringing their spoils back to base for counting the next morning.

Half last year tally isn’t a sign that rabbits are under control, it’s a reflection on fewer shooting blocks available.

Over the mountains in North Otago we’ve been waging war on rabbits all summer and still it’s not unusual to look out the kitchen window and see them nibbling the lawn.

What about the other workers?

Keeping Stock has found another SMOG (social media own goal)  from Labour: 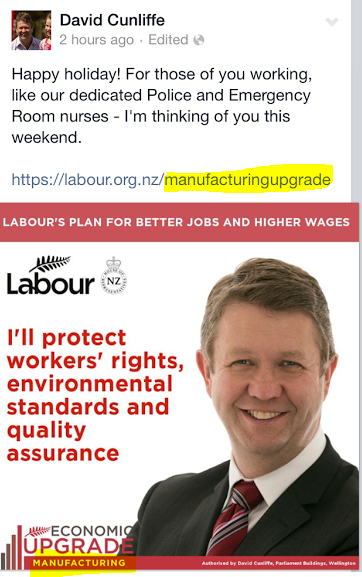 The first blooper is that he’s moved health professionals and police to the the manufacturing sector.

The second is that by singling out just two groups of people he’s ignored all the others  in hospitals and outside who work through holidays.

What about the other workers – the ones in hospitality, media, retail, transport, travel, tourism, entertainment . . .

And let’s not forget farming.

Oh and politics – Cunliffe might have all the weekend off buy I know my MP, Jacqui Dean will be on duty at the the Mackenzie A&P Show today,