AgResearch executives have fronted at a farmer meeting in Wellington to defended the state science company’s plans to relocate its operations to Palmerston North and at Lincoln.

There are fears in agricultural circles that regional agricultural science programmes will suffer when many AgResearch scientists are uprooted from their bases in Waikato and Otago.

He says neither he nor AgResearch chairman Sam Robinson are smart enough to run multiple agendas – there’s been no pressure from the Government to relocate to Lincoln to support the Canterbury rebuild. . .

Rural Women New Zealand played a leading role in today’s launch at Parliament of the International Year of Family Farming 2014 (IYFF 2014), to coincide with the global launch at the United Nations headquarters in New York.

As one of five members of the national steering committee, Rural Women New Zealand has helped bring together a broad cross-section of groups from the agricultural sector.

Representatives of fifty organisations met at Parliament to gather information about the key issues facing family farming, develop plans for research and actions based on this information, and agree on programme outline for IYFF 2014.

Today’s workshops highlighted some of the challenges facing family farms, including succession planning and the price of land, establishment costs and the need to upgrade plant and machinery to remain competitive in an evolving market. . .

Former chairman of the New Zealand Kiwifruit Marketing Board, John Palmer, was last night awarded the 2013 Fresh Carriers Hayward Medal for his tireless efforts to bring the kiwifruit industry through the fiscal crisis in the early 1990’s.

Zespri Chairman Peter McBride announced Mr Palmer as this year’s recipient of the kiwifruit industry award at the Hayward Medal Dinner last night, in front of more than 450 people in Mount Maunganui.

“The kiwifruit industry is facing a huge challenge in form of Psa now but we faced a disaster of equal proportions back in early 1990’s. The financial disaster in 1992 saw the bottom drop out of the market, as prices crashed in an over-supplied European market,” said Mr McBride. . .

An economic cooperation agreement concluded between Taiwan and New Zealand four months ago will enter into force Dec. 1, according to the Ministry of Economic Affairs Nov. 20.

The Agreement between New Zealand and the Separate Customs Territory of Taiwan, Penghu, Kinmen and Matsu on Economic Cooperation (ANZTEC)—signed July 10 in Wellington—is Taiwan’s first free trade pact with a nondiplomatic ally.

“The Taipei Economic and Cultural Office in Wellington and the New Zealand Commerce and Industry Office in Taipei have completed their respective processes,” MOEA Deputy Minister Liang Kuo-hsin said. . .

Central Otago growers have been served up some ”jolly good news” in time for Christmas – Taiwan has removed its tariff on New Zealand cherries.

About 40% of this country’s export cherries are sent to Taiwan and Summerfruit NZ chief executive Marie Dawkins said the tariff-free agreement would take effect from the start of next month .

The first export cherries to Taiwan this season would be sent within days of the new agreement taking effect. . .

New Zealand Young Farmers members are making waves in the agricultural scene at home and abroad.

The Nuffield Scholarship is awarded each year to just a few individuals who have been identified as future leaders who want to make a positive difference to their sector of the primary industry. Only 140 scholarships have been awarded over the past 60 years.

“It’s fair to say I was over the moon and slightly humbled given the calibre of the past Nuffield scholars but very much thrilled to be given the opportunity,” said Mr Olsen, a Manawatu potato grower. . .

With a passion for Chardonnay and red blend winemaking, and the support of an outstanding viticulture and winemaking team, Chris has been crafting award-winning Hawke’s Bay wines for thirteen years.

“Winemaking at Church Road is a team effort,” says Chris, on receiving his award today. “Our vineyard team have an outstanding knowledge of the region and the individual vineyards, and deliver outstanding fruit year after year. Our cellar team has a dedication to wine quality that far exceeds what anyone could hope for. I know everyone at Church Road is extremely proud of the wines we make and this win reflects the passion and commitment of the entire team.” . . .

Six of the total 14 prizes in the Wine of the Year for Australia & New Zealand went to NZ wines in the 2013 Winestate Awards announced this week.

Winestate NZ Winery of the Year 2013: Villa Maria Ltd Highest scored results audited across the year with wines achieving points across all categories.

A blonde and a brunette decided to start a farm together. They added up their life savings and had enough to buy a small plot of land with a herd of cows and $2,000 left over.

The blonde decided to purchase a bull with the remaining money.

The brunette agreed, and went to find the perfect bull on the understanding she’d telegram the blonde to pick it up when she found it.

It took a while but he brunette finally found the bull to meet her requirements. The vendor said he wanted $2,000 for it. The brunette, thinking she could get a better deal, said no to that price.

The brunette accepted and bought the bull. That left her with $1.00 remaining for the telegram  which the man at the telegram office said would cost $1.00 per word.

The brunette thought about that and said,”Comfortable, just send that.”

“Yes, you see she reads slow,” the Brunette replied.

When we first went to Argentina more than 16 years ago we were introduced to the delights of the asado –  barbecues on a parilla – the wood fired oven.

The food was delicious and I put a parilla on my one-day-when list for home.

In the meantime we had to make do with ordinary barbecues, or what one of our Argentinean visitors dubbed asado con gas – asado with gas.

Nearly three years ago we got the South African version of a parilla – a Kiwi Braii – at our crib in Wanaka and now, finally we’ve got a parilla at home.

The last of the fire bricks were installed last week. 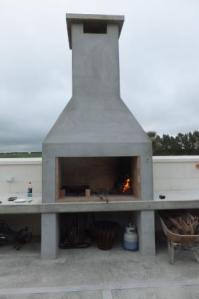 We’ve got 150ish people coming for dinner tonight so my farmer test-drove the parilla, cooking a fillet of beef yesterday evening.

One of the secrets of the asado is cooking over embers rather than flame.

The fire is lit to one side and when the embers drop, they’re lifted on a long-handled shovel and placed under the food.

It requires patience but the taste and tenderness of the meat is worth the wait. 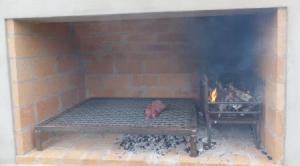 Last night’s test-drive was a success.

I’ll be able to report to our Argentinean friends that we can now cook an asado con y sin gas – with and without gas and we’ve brought the taste of Argentina to #gigatownoamaru.

It hasn’t been a good week for David Cunliffe on the publicity front.

First he confirmed rumours of his high opinion of himself with a biography for the Federated farmers’ conference which described himself as the next Prime Minister.

His second strike came when he referred to Justice Minister Judith Collins as a trout.

He wrote: “The original brief was to respond to a post by Judith Collins. My post was going to be about snapper, not trout. But considering that issue, along with Judith’s leadership aspirations, has floundered, I’ll try another hook.”

As insults go it’s relatively mild but it’s the second time he’s made a sexist remark about the Minister.

Mr Cunliffe has previously apologised for making a sexist remark about the minister. He told RadioLive in 2011 that the human species would be extinct if Mrs Collins was the last woman on earth.

@RuminatorNZ @norightturnnz @DavidCunliffeMP Thing is, Goff had to get him to apologise before for sexist comment. He's a recidivist sexist

Neither over-confidence nor repeated sexism are good look for an aspiring Prime Minister especially one who leads a party which is supposedly so supportive of women it’s introduced a female quote for MPs.

Saturday’s soapbox is yours to use as you will – within the bounds of decency and absence of defamation. You’re welcome to look back or forward, discuss issues of the moment, to pontificate, ponder or point us to something of interest, to educate, elucidate or entertain, to muse or amuse – and to support #gigatownoamaru .

1947 A civic funeral was held for the 41 victims of the Ballantynes Fire.

1971 – Representatives of China attended the United Nations, for the first time.

2011 –  Arab Spring: After 11 months of protests in Yemen, The Yemeni president Ali Abdullah Saleh signed a deal to transfer power to the vice president, in exchange for legal immunity.