Is this the same team?

Is it the same team that has played so abysmally all season  and if so why didn’t they play like this earlier?

Mallemaroking – carousing of seamen on icebound ships; the boisterous and drunken exchange of hospitality between sailors in extreme northern waters.

Lost –and found –  in translation:

The case for partial floats

The Green Party is continuing to spit into the wind with its attempt to get a politician’s initiated referendum on the partial float of a few state owned companies:

P.S. This is our last week to get Keep Our Assets petitions in, so if you have any signatures yet to send, freepost them to me today at:
Russel Norman . . .

Perhaps he wasn’t listening to Question time when Bill English explained the benefits of the policy:

1. DAVID BENNETT (National—Hamilton East) to the Minister of Finance: What are the advantages of using proceeds from selling minority shareholdings in energy companies to buy new public assets, instead of borrowing that money from overseas lenders?

Hon BILL ENGLISH (Minister of Finance): Very significant advantages. In the case of the share sales programme, the Government is swapping one asset—that is, a minority stake in an energy company, which it can only hold and collect dividends—for another asset, which is cash, which it can use for all sorts of purposes. Over the entire programme we expect to free up between $5 billion and $7 billion of cash as a replacement for the asset that we are selling. This will be invested in schools, hospitals, irrigation schemes, the rebuild of Christchurch, and other infrastructure projects. The alternative is to borrow the money from overseas bankers rather than get it from New Zealand savers.

David Bennett: How are proceeds from the share sales programme being allocated to reinvest in other priority public assets? . . .

Hon BILL ENGLISH: The Government has set up the Future Investment Fund. The money going into that fund comes mainly from New Zealand savers who have had the opportunity, and chosen, to invest in large New Zealand companies. The Opposition despises them for this, but we think it is good for the country. The Future Investment Fund will show transparently where that money is going, and it is going to other public assets.

David Bennett: What investments in new public assets has the Government so far confirmed will be made from the Future Investment Fund using proceeds from the share offer programme?

Hon BILL ENGLISH: As the Opposition has pointed out, it is amazing just how many new public assets you can procure. Last year’s Budget allocated $33.8 million for modernising schools, $250 million towards a KiwiRail Turnaround Plan, $88 million for health sector capital, and $76 million for the new Advanced Technology Institute. This year’s Budget allocated $426 million for the Christchurch and Burwood hospitals, $50 million to speed up the School Network Upgrade Project, $94 million for the 4th year of the KiwiRail Turnaround Plan, $80 million for irrigation projects, $700 million in contingencies for projects such as new schools in Christchurch, Christchurch’s justice and emergency services precinct, and supporting Canterbury’s tertiary institutions to recover from the earthquake. The Government also agreed that over the life of the fund $1 billion will be allocated to other health capital projects. . .

David Bennett: How does New Zealand’s approach to investing in new public assets while limiting extra debt compare with approaches in other countries?

Hon BILL ENGLISH: Although some regard this idea as extreme, in fact it is very common around the world. The following OECD countries have Governments that partially own companies that are floated on the stock exchange: Austria, Belgium, Chile, the Czech Republic, Finland, France, Greece, Japan, Korea, Norway, Poland, Slovenia, Switzerland, and the United Kingdom. Unfortunately, the Labour Party models itself on Albania, which does not have any of these sorts of companies.

The alternative to selling minority shares in a few state assets are: print more money, borrow more money, tax more or do less.

On track to surplus

A further improvement in government tax revenue left the operating deficit before gains and losses $763 million smaller than forecast in the 11 months to 31 May, Finance Minister Bill English says.

“The improving economy suggests this lift in tax revenue is likely to remain through until the end of the financial year on 30 June,” Mr English says. “With the Government having locked in its spending track for the next few years, this pick up in revenue, as the economy and company profits improve, is flowing through into the Government’s books.

“This is a positive sign and confirms that the Government remains on track to return to surplus in 2014/15, so we are in a position to have choices about repaying debt and investing more in public services.” . . . 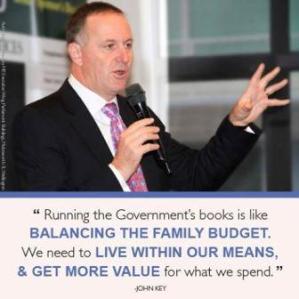 Another reason to vote for Oamaru

Warren Barton suggests you wend your way to Waitaki:

Don’t write off the Waitaki Valley, which straddles the boundary between North Otago and Canterbury, as a producer of quality wines – especially pinot noir.

This from Grant Taylor from Valli Wines, following the pullout from the area of two of the bigger producers, Craggy Range and now Pasquale, the latter owned by an Italian who spent millions establishing vineyards and a winery there.

If anyone should know it is Taylor -who grew up in Kurow, in the Waitaki Valley, honed his skills in the United States and returned in 1993, when the entire Otago vineyard was measured at just 20 hectares, to become the winemaker at Gibbston Valley Wines. . .

The proximity to the Waitaki Valley with its wonderful wines, honey, salmon and trout fishing, skiing – snow and water – tramping, yachting, boating, Vanished World fossil trail . . . is another reason to vote for Oamaru as the country’s Sharpest Town.

You can vote here.