The Upper Clutha A&P Society boasts the most picturesque location for its annual show.

It’s held only a few metres from the shore of Lake Wanaka and the grounds provide views across the water to the mountains.

This isn’t its only claim to fame, the two-day event is also the second biggest show in the South Island and each year it gets bigger.

When we first went to the show trade displays, sideshows and other exhibits were contained in the show grounds. Now each year it stretches further across neighbouring Brownston Park.

The location isn’t the only reason for the show’s popularity. Another is that it has stayed true to its rural roots with stock judging, equestrian events and home industry competitons. But it has also broadened its appeal with new events including the annual highlight the Jack Russell race.

The Glammies are held at the show and this year Beef + Lamb New Zealand’s marquee was also the venue for a tri-nations competition between Australian, British and New Zealand butchers. 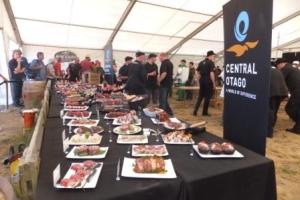 I haven’t  been able to find the results for either of those competitions but will post them when I do.

The hot, dry weather which is now causing concern for most of the country was a major topic of conversation and last year’s elation over good prices of lamb were a distant memory as the perennial debate about the meat industry continued.

New Zealand’s red-meat sector is at a ”critical junction” and farmers have given the message they want action to turn around the precarious situation, Beef and Lamb New Zealand chairman Mike Petersen says.

Speaking at the organisation’s annual meeting, held at the Upper Clutha A&P Show in Wanaka yesterday, Mr Petersen said volatile returns were a real threat to the industry’s future and farmers were questioning whether the industry had a future. . .

The weather which isn’t good for farming, was wonderful for wandering, looking and talking.

In spite of adverse climatic and market conditions,  the mood was relaxed and happy, because as a North Island visitor observed, it was a really good show.

This entry was posted on Monday, March 11th, 2013 at 10:15 am and is filed under Farming, rural. You can follow any responses to this entry through the RSS 2.0 feed. You can leave a response, or trackback from your own site.