Desideratum –  something that is needed, desired or wanted.

One of the highlights of last September’s trip to Argentina was visiting Mercado de Liniers.

Seven fifteen is an early start when you’re on holiday, but the Buenos Aires cattle market opens for business at 7.30am.

We were picked up from our hotel by a driver and Maria, our guide who has made tours of the market her speciality.

Cattle arrive overnight from up to 500 kilometres away. They are checked by a vet and weighed by pen then walk seven blocks from the scales to the market which covers an area of 34 hectares.

It is criss-crossed by a series of raised walkways which enable buyers, brokers and visitors to get a good view of the stock below. 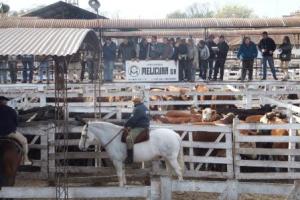 Our party included farmers and stock agents. They didn’t understand Spanish but recognised the nods, winks and other body language of the buyers which is universal.

They noted how quiet the cattle were and put this down to the fact they were worked with horses which needed little, if any, guidance from their riders.

All cattle must be sold no later than the day after they arrive and on Fridays all stock must be sold because there’s no market at the weekends.

The day we were there 8,500 head of cattle went under the hammer. The most sold in the three years our guide had worked there was 31,000, well short of the market record for a day’s sale of 42,00o.

A bell ringing for about five minutes signals the start of an auction. Prices went from 8.5 to 10 pesos a kilo, liveweight. As each pen is sold cattle are taken by men on horse-back to be weighed – manually and electronically.  Both weights must agree because stock is sold by price per kilo.

Weights and prices are conveyed by fibre optic cable to a central computer and are available instantly on the market website so Liniers  sets the price around the country.

When stock is transported from the market the trucks are tracked by GPS as a security measure to ensure the driver doesn’t drop off any cattle en route.

The neighbourhood grew up on the back of the market which still supports 2,500 families.

Outside the market is a monument to a gaucho, the only one of dozens in the city which pays tribute to a worker. 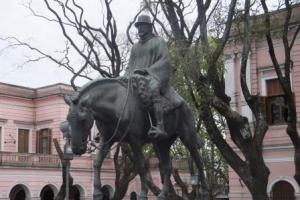 Our guide, Maria, who speaks perfect English, has her own company Bespoke Tours.

I had a computer problem yesterday, so I called Eric, the 11 year-old next door, whose bedroom looks like Mission Control and asked  him to come over.

Eric clicked a couple of buttons and solved the problem.

As he was walking away, I called after him, ‘So, what was wrong?
He replied, ‘It was an ID ten T error.’

I didn’t want to appear stupid, but nonetheless inquired,

Eric grinned … ‘Haven’t you ever heard of an ID ten T error before?

So I wrote down:

The media is supposed to present a range of opinions to give balance.

To do that reporters have to question what they’re told and they usually do that when they’re sufficiently informed and on-guard.

Anders Crofoot is concerned that the media’s guard seemingly slips when it comes to matters agricultural, where opinions, statements and belief systems face little critical challenge.

As a farming leader, I have often been called for comment when the story seemingly has already been written; all to provide it with “balance.”

At other times, marketing hype is taken as gospel by the media and even some politicians creating problems for farmers. This was rammed home to me by a senior Opposition MP.

After rounding on Federated Farmers over the “One Plan,” he was apparently asked by a member of the rural media where he had sourced his information from and the answer I was told was the Dominion Post. . .

He then gives the example of a Country Calendar story in which a farm consultant using a refractometer wasn’t questioned.

To be fair, Country Calendar isn’t the sort of programme where those featured have their practices debated, but the example raised a concern:

So why does this cause problems for farmers? At first glance it seems scientific; we have a tool with a long name and measurements being recorded. To a lay person, it is reasonable to think this approach is great and to demand to know why more farmers aren’t doing the same.

This is the problem because there was no evidence it worked.

If you produce fewer goods at a lower cost then it may be profitable on a pure percentage basis.

Yet if your overall profit declines it may not be such a good outcome; especially if you are early into your career and paying off the mortgage.

Farming is complex and is influenced by terrain, soil, rainfall, stocking mix and economics. One system does not suit all, but in putting it on a pedestal, the expectation spreads and can create unrealistic policy assumptions.

Influence on individual farmers is their business but when unsound or unrealistic assumptions influence policy it has far more serious consequences for farming in general.

Another 2012 example of what I mean came from the kiwifruit industry’s struggle with the PSA disease. A RadioNZ interview I heard had someone promoting their product with the claim Italy had overcome PSA thanks to it.

The problem is that Zespri has evaluated over 500 special products and none have produced a repeatable, reliable positive effect. While many ‘solutions’ taint the fruit, all the layperson hears in the marketing hype is a solution; they cannot understand why the industry isn’t adopting it to help itself out.

The software industry, in which I used to work, has a wonderful expression, “eating your own dogfood”. Do those who plug these products use them? Perhaps that doesn’t matter because the media, politicians and regulators hear these claims and has them asking why farmers aren’t using miracle solutions.

Everyone, except those who pay for them, forget that what counts are repeatable and concrete trial results each and every time.

This is why uncritical media coverage creates problems.

In the pursuit of a story, uncommon practices and hype are presented with equal weight giving the impression they are equally viable. Without qualification, this understandably has non-farmers asking why farmers don’t use them.

A range of opinions can provide balance but not all opinions are equal.

Marketing hype is perhaps the greater problem because it seeps into the heads of regulators and politicians looking for a solution.

For me, as a farmer, I do not wish to incur costs unless I know it will benefit our farm and the environment.

Just because it is printed doesn’t mean it is true.

Just because someone says it, doesn’t mean it is so.

Just because we see something doesn’t mean we should believe it.

Demand evidence before making decisions or publishing claims. This is why the media need to retain a healthy scepticism to claims, the same one it seems to show towards farmers.

Healthy scepticism is essential in good journalism and in the formation of good policy.

If it uses our brand it must meet our standards

New Zealand’s reputation for safe food is one of the reasons it is attractive to Chinese dairy companies wanting to build infant milk formula plants here.

Fran O’Sullivan writes that the  Chinese are eager to milk NZ brand and that does come with a risk:

At issue is whether the Government needs to take clear steps to ensure the Chinese companies do live up to the powerful New Zealand brand image and make abundantly sure that their infant formula products are kept free from contamination at all steps in the supply chain from the milk supply through to the factory then on to the supermarket shelves, and whether they also need to place clear strictures on just which companies can use the attributes of the New Zealand brand in China. . .

But I am concerned about any risk that might pose to our brand.

New Zealand food is trusted for very good reasons – the way it is produced and the regulations which govern its production and processing.

That makes the New Zealand brand very powerful and it must be safe-guarded.

If food is produced here by a foreign company or somewhere else by a New Zealand one and uses our brand it must meet our standards.

This soapbox is yours to use as you will – within the bounds of decency and absence of defamation.