Atrabilious – inclined to melancholy or ill-temper; ill-natured; having a peevish disposition; gloomy, surly.

Entries have opened  for the Enterprising Rural Women Awards:

In their fourth year, the 2013 Awards are bigger and better than ever, with four Award categories:

Love of the Land – sponsored by Agrisea (Entries open for all land-based businesses.)

Help! I need somebody – sponsored by Telecom (Entries open for businesses providing any type of service.)

Making it in Rural – sponsorship tbc (Entries open for any business that involves manufacturing or creativity.)

Growing xenophobia in New Zealand, as it wrestles with Chinese investment, will be one of the Pacific’s top talking points in 2013, according to a Washington think tank.

The Center for Strategic and International Studies advise observers to keep an eye on the ongoing debate about foreign investment in New Zealand, especially from China.

Under the headline “New Zealand’s comfort with Chinese investment”, the centre has chosen the issue as one of six in the Pacific region particularly worth watching. . .

The New Zealand Large Herds Association (NZLHA) executive committee will not be holding an annual conference this year.

The committee decided to cancel the conference because of the continuing decline in attendance over recent years.

“The last three years have seen a decline in numbers of delegates attending. This has had an impact on how we foresee our conference in the future, for not only the farmer but our sponsors,” association chairman Bryan Beeston said. . .

This isn’t meant to denigrate the difficulties here, but it puts things in context. One rancher has cut his 2000 head flock by a third and is losing US$80 on every lamb he sells. According to the article, drought, consolidation of the sheep-packing business, increased feed costs and plummeting lamb prices have created hardship among sheep ranchers across Northern Colorado. The situation has deteriorated so much for ranchers that the federal government is investigating whether meat packers have played a role in the market’s collapse. . .

The Agri-Women’s Development Trust (AWDT) is celebrating a second successful year with 14 graduates from its 2012 Escalator agricultural leadership programme.

The 10-month programme aims to create prospective future leaders with the skills and capability to govern and lead agricultural organisations and communities.

Federated Farmers Ruapehu provincial president and 2012 Escalator graduate Lyn Neeson said it gave her more awareness of what she can accomplish for agriculture. . .

Getting more from collaboration:

Federated Farmers is expanding its highly successful Leadership Development Programme for members and others in primary industries.

Many agricultural sector leaders have been through the Federation’s stage one and two Leadership Courses. These give individuals vital skills to work in teams and understand the technical, emotive, cultural and political aspects of issues.

The level one Getting Your Feet Wet and level two Shining Under the Spotlight courses give participants the techniques and methods to analyse and bring together a compelling case to present their desired outcomes. . .

FAR focus on the future of farming – Howard Keene:

The annual Foundation for Arable Research (FAR) Crops Expo at its Chertsey site in Mid Canterbury has grown over the years from humble beginnings to become a major event on the agricultural calendar attracting hundreds of grower and industry people.

This year was the second time the event has been held in its expanded format. It’s now an all-day event with agronomy and machinery companies adding their own trials and demonstrations to those of FAR. . .

2012 a watershed year for pork industry:

New Zealand Pork has today released its 2012 annual report, which labels last year a turning point for the industry.

“Although the last financial year has not been without challenges, I believe it has also been something of a watershed for our industry,” NZPork chairman Ian Carter said.

Look at her record

The United Nations Development Programme’s executive board is less than impressed by progress in reducing poverty:

Former prime minister Helen Clark has been hit with a devastating critique of her United Nations Development Programme (UNDP) in an official report saying much of its annual US$5.7 billion (NZ$6.8 billion) budget is only remotely connected to ending global poverty.

The densely worded report by the UNDP’s executive board – Clark’s bosses since she became secretary-general in April 2009 – amounts to a stinging performance review.

US media reports say she is leading a counter-attack claiming the study misses the point behind its work.

But the report paints a striking picture of a confused organisation seemingly unable to bring significant change to the world’s 1.3 billion poor people despite spending US$8.5 billion on fighting poverty between 2004 and 2011. . .

Is there any surprise in that, look at Ms Clark’s record on reducing poverty when she was Prime Minister of New Zealand.

That was a much easier job than tackling it on a global scale.

Yet what did she achieve in what was generally a good economic environment globally and domestically?

Her government introduced measures which gave assistance for people in greed rather than need, Welfare for Families which turned middle and upper income families into beneficiaries is a very expensive example of that.

It threw money at problems rather than seeking solutions.

It increased the burden of government, adding to public sector numbers without increasing productivity, and masked recession in the export sector with a consumption boom fuelled by borrowing and spending based on higher taxes.

The number of people unemployed and on very low incomes has increased since the global financial crisis. But there was already a solid foundation of poor who were not helped by Ms Clark’s government through nine years of much better economic times than we’ve had in the four years since she left.

In her defence however,  the executive summary says the report covers the period from 2,000, and Ms Clark has only been secretary general since 2009 and she was set an impossible task.

There are many causes of poverty and among those for the poorest are political and social factors against which an agency like the UN is powerless regardless of how much money it throws at the programme.

Farmers haven’t been convinced of the case for roll bars on quad bikes.

But Ag Tech Industries has come up with something much better.

Their Lifeguard, is a passive, flexible and yielding crush protection device:

A steel roll bar will give crush protection but can have limitations, as they can cause injuries in themselves, being very unforgiving when they strike or land on the rider on the ground. Because of this, Ag-Tech Industries of Dargaville has come up with an entirely new concept which has been developed and tested over the past 18 months. . .

The difference is that it is not a hard, ridged roll bar, but is passive and flexible, and will deflect around a person’s body, limbs or head on impact, but will not collapse, and still hold a quad up off the ground to provide crush protection for the rider.

This product won the New Zealand “Golden Standard” Agricultural Invention of the Year award in 2012 because of the benefits it offers to farm safety and improvement to industry.

The secret of the Lifeguard invention is that the arc is made from individual segments tensioned together by cables, enabling it to flex and move on impact, but it also supports tonnes of weight. . .

The Lifeguard won the “Golden Standard” Agricultural Invention of the Year award at the Mystery Creek Fieldays last year.

Economic activity in the December quarter  surged to the best level since mid-2007 according to the New Zealand Institute of Economic Research’s Quarterly Survey of Business Opinion.

“There are encouraging signs of a strengthening economic recovery. The latest bounce is concentrated in Auckland, and Canterbury to a lesser extent,” said Shamubeel Eaqub, Principal Economist at NZIER.

The latest pickup is not yet flowing through to the labour market. New hiring remains subdued and labour is getting a little easier to find outside of Canterbury. This is surprising as a recovery in activity tends to be accompanied by more jobs and increasing competition for labour that raises wages. This part of the recovery remains absent. It may be explained by reduced working hours during the recession, which are now returning to more normal levels, rather than through increased hiring.

Investment intentions, while positive, are also low compared to what we normally see in a recovery phase.

Capacity pressures are intense in Canterbury, but there is little pressure in the rest of the country. Firms do not intend to raise prices much. Consumer price inflation will remain low. Margins remain under pressure, but profits are beginning to lift on the back of better sales volumes.

The RBNZ will keep interest rates on hold for some time. The QSBO shows the beginnings of a recovery, but still very low inflation. 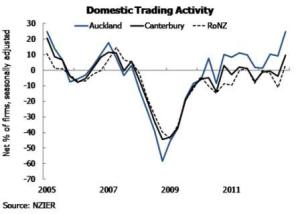 One quarter does not a full recovery make but it is a long awaited sign of improvement.

The Christchurch rebuild is having a positive impact further afield than Canterbury.

Building tradespeople I’ve spoken to in Oamaru in the last week say they were busy at the end of the year and busier still this year.

“I don’t want to buy them, I’m experimenting,” she replied.

“Now I put a whole lot of things I didn’t need on the list in the hope I’ll buy the things I do.”

“Sort of. I haven’t bought anything that’s on the list; now I just have to figure out how to make it work for  buying the things that aren’t on the list .”