The last person fluent in the fisherfolk dialect of Cromarty has died.

It was a traditional dialect used for  centuries by fisherfolk.

But yesterday it emerged that the language of  Cromarty had finally died with the passing of its last speaker.

Bobby Hogg was the only person still fluent  in the age-old tongue of the Black Isle and his death at the age of 92 means it  will now exist only in audio recordings. . .

Some of the words in the dialect include:

2.  From which poem does the following quote come and what is the last line: Beauty is truth, truth beauty,—that is all . . .

3. It’s laid in French; brutto in Italian, feo  in Spanisha and kikino in Maori, what is it in English?

4. Who said: “Have nothing in your house that you do not know to be useful, or believe to be beautiful.”?

5. Do you judge books by their covers?

Alwyn wins an electronic bunch of daffodils with 4 1/2 (it was William but Morris not Barnes).

Rob got two and a bonus for humour.

END_OF_DOCUMENT_TOKEN_TO_BE_REPLACED

A visit to a cemetery isn’t always on the must-do list for tourists but Recoleta in Buenos Aires is well worth a visit.

It’s like walking through a miniature village with streets lined not with houses but crypts and mausoleums.

Situated in one of the city’s posher neighbourhoods, in what was the garden of a convent, the cemetery covers about five hectares.

Recoleta contains the remains of several of the country’s notable citizens including Eva Peron. 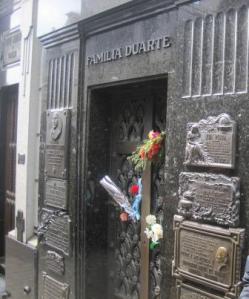 If  there’s one thing the political left does much better than the right, it’s submit.

That could be because people on the right are getting on with their lives and work and are less concerned about giving their views.

Whatever the reason, it would be helpful if there was a bit more balance in submissions on legislation such as the Crown Minerals (Permitting and Crown Land) Bill.

This bill is an omnibus bill and amends the Crown Minerals Act 1991, the Conservation Act 1987, the Continental Shelf Act 1964, the Reserves Act 1977, and the Wildlife Act 1953. This bill aims to promote prospecting for, exploration for, and mining of Crown owned minerals for the benefit of New Zealand. . .

The Bill aims to:

. . . encourage the responsible development of Crown-owned minerals, so that they will contribute even more to New Zealand’s economic development. They will also streamline and simplify the regime where appropriate, bring it into line with the regulatory reform agenda, and make it better able to deal with future developments. The bill will insert a purpose statement into the Act that demonstrates the Government’s commitment to growth of the sector. The purpose of the Act will be to promote prospecting for, exploration for, and mining of Crown-owned minerals for the benefit of New Zealand, by providing for the efficient allocation rights to prospect for, explore for, and mine Crown-owned minerals, and for the effective management and regulation of the exercise of those rights, and for a fair financial return to the Crown for its minerals. . .

The left, and particularly the dark green section of the left, are sure to submit in force against the Bill.

It would be helpful to the government if people who support the Bill make submissions to give some balance to the inevitable debate.

You can find out how to make a submission on the first link above and find out more about the Bill at the second.

Submissions must be made by Friday November 2nd.

Submissions are also sought on the draft minerals programme. The close off for these is december 5th.

For the sake of the children

People taking part in today’s national day of action against welfare reforms are taking offence where none is intended.

The reforms aren’t directed at people in temporary need who are doing their best to find work.

They’re not aimed at people who will always require assistance nor at those who are already looking after their children well.

It’s aimed at people who could work and don’t and at those who take money for their children but don’t care and provide for them as they should.

I have only second-hand knowledge of what it’s like to be brought up in a family where parents don’t put their children first, ensure they have the health care they need and make the most of opportunities for education.

This correspondent to The Listener (not on-line) has first-hand experience:

I wish the Government had introduced the new conditions for receiving a benefit when I was a child (Politics, September 22).  Then maybe I wouldn’t have had a childhood plagued with preventable illness, illness that has continued to affect me into adulthood.

Perhaps I would have gone to school. Maybe even learnt to value education and understood what it meant for my future. Maybe i would have stayed at school and gone on to university. Moved up the socio-economic ladder. Perhaps I would have felt someone cared about what happened to me.

Unless you’ve lived the life, you don’t understand it. Beneficiaries are in a different category of citizen. they lose themselves in the day-to-day dysfunction and chaos of their lives; their children’s health and welfare are often not a priority.

All the doo-gooders out there tut-tutting about the Government’s decision need to get a reality check. When it comes to a taxpayer-funded benefit, the rights of the parents don’t come into it. the priority should always be the health and welfare of the children.

This is one woman’s experience. It doesn’t mean that all beneficiaries don’t make their children a priority but it does show why there is a need to ensure that the right to a benefit is balanced by the responsibility to look after the children for whom at least some of the money is given.

2011 – The MV Rena  ran aground on the Astrolabe reef near Tauranga,  resulting in an oil spill.