When Te Anau’s Lex Lawrence realised his tractor was on fire he did what any Southern man would and took it to the nearest water.

While trying to beat the grass fire out, he turned to find his tractor was also on fire.

Apropos of this, a few years ago my farmer  stopped about a kilometre from home to complete a cell phone call while he still had reception, smelled something burning and worked out it was under his vehicle.

The cover over the exhaust had detached at the front  and acted like a scoop gathering up dry grass and seeds when he drove through paddocks and the debris had started to smoulder.

He dropped the call, rushed home and tore inside to get the fire extinguisher.

It had gone out to a paddock some months before and as such things do hadn’t come back.

He went to plan B and drove the vehicle to the big hose used for filing the sprayer. Trouble was that was right beside the diesel and petrol pumps.

He then went to plan C – drove the vehicle to the very edge of a loading bank which enabled him to get under it and hook the smouldering foliage out with a shepherd’s crook.

All our vehicles now have fire extinguishers and they’re checked regularly.

Take the weather with us

I think I might have been a tomato in a former life.

I’m definitely not red now but I’ve retained the sun-loving and heat-seeking genes.

It’s not that I don’t like rain. Living in a drought prone area I know only too well how important it is and North Otago farmers appreciated the 9 to 18 mms we got at the weekend.

But I prefer blue sky to grey and find life goes better when the sun shines, especially in summer.

This isn’t unusual. Eric Barker writes about how we take the weather with us.

He found studies which showed how warm or cold we are towards others varies with the weather; people shop more on sunny days and work more when it’s wet; cloud cover influences which university people pick and job interview performance and heat also increases aggression.

Given all but the last point, the southern South Island has been the place to be for the last couple of weeks.

We came over to Wanaka on Christmas night and have had the sort of weather I remember as a child with sun every day.

My farmer’s had to go back to the farm but I’m taking an extra couple of days to extend the sunshine-fix.

As a public service for those who’ve not been fortunate enough to have summer yet, this is what the day looked like as I walked down Mt Iron this morning: 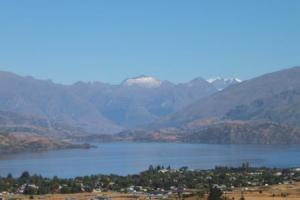 Can’t believe they made a film about Margaret Thatcher and called it The Iron Lady. It’s 2012!!! Ladies don’t just do ironing!

Child poverty sounds much worse than poverty by itself.

Children are rarely in a position to help themselves, therefore alleviating their poverty requires the help of others. Most of those focussing on child poverty think that means the government in general and publicly funded welfare in particular.

However, there is little if any real child poverty in New Zealand.

This isn’t a third world country where large numbers of children have lost or been abandoned by their parents.

Most if not all children living in poverty in New Zealand are under the care, however adequate or not that might be, of adults. Most, if not all,  of those adults are receiving benefits or tax relief which takes into account they have children.

The term child poverty is being used more in New Zealand but it is a slogan that identifies a symptom not the problem.

The problem is poverty in general and it has more than one definition and many causes.

One definitionn of  poverty, particularly popular among the political left, is receivving less than  60% of the median income. That is a measure of inequality rather than poverty

Dragging the wealthy down would reduce inequality but would not address the problems of real poverty.

A more useful definition is the World Bank’s which is whether households or individuals have enough resources or abilities today to meet their needs.

That some – and any is too many –  children in New Zealand are ill-nourished, poorly clothed and housed, have inadequate hygiene and ill-health is not always because their parents have low incomes.

Other causes include poor management of the money they do have, poor literacy and numeracy, drug, alcohol and gambling addictions, other physical and mental health problems and debt.

Many of these problems are inter-generational and they won’t be solved by focussing on child poverty.

This is not the children’s fault and they almost certainly suffer most from it.

The challenge is to find a way to ensure children have what they need without enabling those charged with caring for them to abdicate further from their responsibility to do so.

Another challenge is to increase economic growth because lack of national wealth is also part of the problem.