Europe is teetering on the brink of financial meltdown, we’re just six days away from an election, and TV3 wants to know how sexy party leaders are:

I don’t know which is worse, that they’ve wasted time and money and insulted the intelligence of viewers with such a survey or that having done so they didn’t include the two female co-leaders.

Or would it have been worse if they had included them?

Charlatan – trickster, con artist, swindler, quack; person practicing quackery or some similar confidence trick in order to obtain money, fame or other advantages via some form of pretense or deception; person who pretends or claims to have more knowledge or skill than he or she possesses.

The Queen of Victorian Oamaru with one of her foot soldiers and the Mayor and Mayoress. 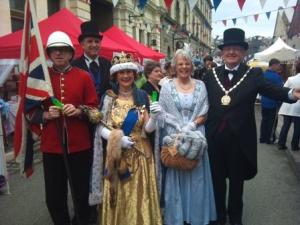 Another dead child as a result of violence.

Another mother living with a man who was not the chidl’s father.

Another group of adults telling stories which don’t add up to the facts.

“We want to provide strong and stable Government … in my view it would not include Winston Peters …. He has a history of breaking up Governments and costing a lot of money.”  John Key.

A day at the races

North Otago is celebrating its Victorian Heritage this week.

Most people who work in the historic precinct dress up to the Victorian theme all the time. During heritage celebrations many locals and visitors also don the clothes our earliest European settlers wore.

Yesterday we spent a very enjoyable afternoon at the gala race day.

The Queen’s guard took a break from guarding to chat to visitors: 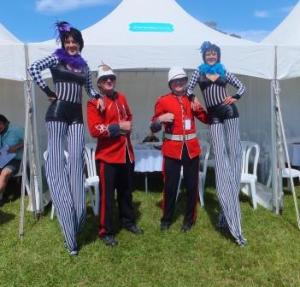 While the Queen herself took part in, and won, a celebrity race: 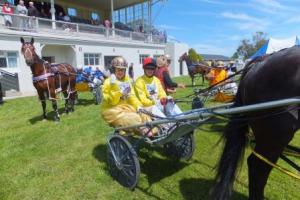 We were treated to fine food from Sally Anne of Fat Sally’s and Portside fame, had  lots of laughs and I made an $8 profit from betting.

The placement of these Labour campaign posters and pro MMP ones could be a coincidence.

But this, from Whaleoil, makes it unlikely:

If this is true it says a great deal about the lack of on the ground support some Labour campaign teams have lost their volunteers and are now having to resort to union dominated campaign teams from the MMP crowd.

It also shows clearly the links between Labour and the Campaign for MMP.

The loss of active party members has coincided with the increase in power for parties under MMP.

The concentration of power in a very few hands is not good for democracy and is a very strong argument to vote for change in Saturday’s referendum.

P.S. the authorisation statement on the MMP posters is Campaign for MMP, not a person. Advertising for parties or candidates requires the name of a person, not an organisation, does this not apply to promoters for referendum advertisements?