Tineke was the North Island winner. She is pictured (middle) with Judy Bailey who presented the award and Rural Women national president Margaret Chapman. 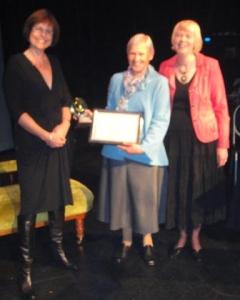 When the two finalists were announced, there was some controversy over the North Island award going to a homeopathic company. But judges were not looking so much at what a business did as how, and how well, it was run.

Listening to Tineke speaking last night, no-one could doubt her passion and commitment.

This entry was posted on Wednesday, May 26th, 2010 at 2:18 pm and is filed under business, rural. You can follow any responses to this entry through the RSS 2.0 feed. You can leave a response, or trackback from your own site.