You can’t judge a book by its cover, nor can you judge what someone will read by their appearance.

Helping at last week’s Rotary Bookarama in Oamaru was a fascinating study in human nature.

Had I put bets on what people might be interested in I’d have been sadlyout of pocket: the woman I thought might go for something literary opted for chick lit; the one I’d classified as a chcik-lit fan chose biographies; the mild-mannered bloke went for horror; one who looked like a professor bought westerns and a little old lady chose the raciest Mills and Boons.

That’s not a bad earner when most hardbacks were sold for only a dollar and paperbacks for half that. 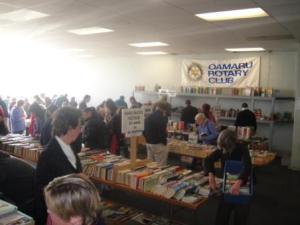 This entry was posted on Saturday, May 15th, 2010 at 11:20 am and is filed under Books. You can follow any responses to this entry through the RSS 2.0 feed. You can leave a response, or trackback from your own site.

4 Responses to Judging books by covers