The Monty Python team is to receive a British Film and Television Arts special award to mark their contribution to film and television at their 40th anniversary reunion event in New York.

The Special Award will be presented at an event co-hosted by BAFTA and IFC (Independent Film Channel) to celebrate the 40th anniversary of the creation of Monty Python. John Cleese, Terry Gilliam, Eric Idle, Terry Jones, and Michael Palin will all be in attendance.

The Academy last honoured the Monty Python team in 1987 when they were presented with the Michael Balcon Award for Outstanding British Contribution to Cinema.

In honour of that the Cheese Sketch:

There’s lot more where that came from here.

She has a poet’s gift for making every word count, painting word pictures and trusting the reader to see beyond the surface.

I loved the way she wove poetry into the prose:

From the Dom zu Berlin rooftops: a man clinging to the rounded blue glass of the new hotel roof as he adjusts something. Dizzy, I hold my breath, look away. Over in the distance, a think blue line on the horizon.

Those of us born on islands

as sea, a distant line

It’s an original approach which makes this book so much more than a travelogue. 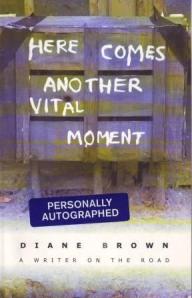 Over at In A Strange Land Deborah posts on Maraea and the Albatross by Patricia Grace, illustrated by Brian Gunson.

He had brain damage as a result of something which went wrong at his birth.

That caused multiple disabilities and he passed none of the normal developmental milestones.

He was exactly a year older than our son who also had brain damage.

He too had multiple disabilities and had passed none of the normal developmental milestones.

But Dan’s condition wasn’t the result of an accident so he, and we, got none of the assistance available to the other boy and his family through ACC.

On the face of it that might look unfair. But there was one very important difference between these two cases – the parents of the other boy could have sued someone for compensation, we could not.

One of the main reasons the no-fault ACC scheme was set up was so that people who had suffered from an accident didn’t have to go through an expensive and lengthy legal process to get compensation.

That’s a noble aim but how many of the accidents for which people are able to claim ACC are the result of something someone else did or didn’t do and over which anyone might have tried to sue?

ACC has paid for me to visit a dentist once, a few trips to a GP and physio and one to a hospital emergency department.  All of those were for relatively minor injuries. The cost of filing a claim would have been far greater than the cost of the visits and none of the accidents was anyone else’s fault.

Nick Smith expressed it badly, when he said if he was dying of cancer his family would be better off if he committed suicide. But he was right that while tragic, suicide is not an accident.

Nor are murder and rape. These two are crimes and if victims and their families need help it should be through the justice system not ACC.

If ACC is to be affordable in the long term then what it covers has to be reduced.

Disqualifying claims from people who were injured while committing crimes is a good start but only a start.

If the first couple of visits to a GP weren’t eligible for ACC there’d be far fewer claims for minor injuries.

We also need to look at whether a monopoly scheme is the best for most people. Opening accident compensation to other providers and allowing people to opt out of the compulsory scheme should be investigated.

Life isn’t fair. Bad things happen. But the state can’t always make them better and trying to do so through ACC as happens now has made the scheme unaffordable.

Like PDM, who left a comment three posts back, I’ve noticed that since Keeping Stock stopped keeping stock there’s been  a gap in the blogosphere for those interested in sport talk.

I don’t have Keeping Stock’s knowledge, but until someone who has fills the gap,  if readers want it, I’m happy to provide a weekly post where sports fans are free to discuss and debate sporting matters.

The floor is yours.

Noises in the night

We were woken by a strange noise just before dawn.

When it got light enough to see we found the source – a possum in the tree a metre or so from the bedroom window: 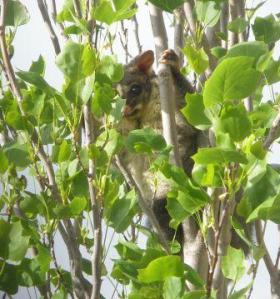 Tatua topped the dairy payout for the 08/09 season with a final figure of $5.38  and no retentions.

Fonterra’s final payout was $5.21 with a one cent retention and Westland paid out $4.50.

In an email to shareholders, Henry Van der Heyden said that international milk prices are holding up.

They need to be with the dollar high and climbing.

A Media & Communications student emailed asking for answers to questions she posed as part of a research project on the relationship between journalism and blogging.

What motivated you to begin your blog? What role do you intend for it  to play in society?

I’d been reading and commenting on other people’s blogs, noticed there wasn’t much from a rural perspective and decided I had enough to say on my own.

I’ve never considered what role my blog plays in society. I hoped it would be read, enjoyed and engender debate.

Do you think traditional (print and broadcast) journalism is fulfilling its societal role of providing neutral, reliable, accurate and democratic information to citizens? Do you think bloggers fulfil  these values better?

The best journalism is still unbiased (though not necessarily neutral), reliable and accurate (not sure what democratic information is).

The loss of institutional knowledge in news rooms means that a lot of less than the best ends up printed and broadcast. The move to infotainment and comment in news items, on TV in particular, means a lot isn’t neutral, reliable or accurate.

Most blogs are commentary not journalism, similar to letters to the editor without the intervention of an editor. Many are churnalism.

Few if any, try to be neutral or unbiased but the good ones are up front about their bias and are reliable and accurate. The worst pretend their not biased and just rant. The best of those which do break news are as good as, sometimes better than, traditional media. But most bloggers blog part time and unpaid without the resources available to newsrooms.

Is it your intent to cause a change to journalism? Do you think  blogging is changing traditional journalism? If so, do you think this  is positive or negative for journalism as a whole?

Interest.co.nz’s post on Crafar Farms was very quickly followed up by other media, on and off line.

Blogs sometimes hold traditional media to account and providing they do it fairly, that’s good.

What do you think are the negative points/things which should be changed about blogging as journalism? What is your reaction to claims that blogging is negative for journalism because it is partisan, only  provides links to ‘real’ journalism, and has too little access and  influence?

Rants and personal invective are negative but that isn’t journalism and, as with any other media, if you don’t like it you don’t have to read it.

The lack of editorial control is liberating but it can also be dangerous, especially with court cases where blogs have broken suppression orders or been in contempt of court.

Not all blogging is partisan and some of the partisan ones are very good. They break stories, use original sources and facts as any journalist in traditional media ought to. Kiwiblog, Whale Oil and Cactus Kate are upfront about their bias but break stories which are followed by other media.

Some traditional media and/or journalists are partisan too, although they are less likely to admit to it.

Partisan isn’t bad by itself, it’s any media which pretends to be unbiased when it’s not, that is the problem.

How would you describe the interaction between blogging and traditional journalism?

Blogs and traditional journalism compliment, sometimes compete, sometimes feed off each other. Most blogs would have a lot less to say if it wasn’t for traditional media. But some blogs use original material and the traffic isn’t all one way. As individual blogs enhance their reputations by breaking stories the media will refer to them more.