As I finished getting petrol in Dunedin on Friday evening a couple of young women in fancy dress rushed up and asked me to sign their arms as one of the things they needed for a scavenger hunt.

The bloke who took my money explained it was one of the activities for Undie 500 weekend and he was pleased he wouldn’t be working the following night because the last time the Undie 500 hit town the Saturday night was no fun for workers.

As I drove north a couple of hours later I noticed a large contingent of police on the outskirts of the city and an almost constant stream of cars heading south.

There was no sign of anything amiss when we passed through the campus yesterday.

Today we spotted dozens of decorated vehicles like this one heading north: 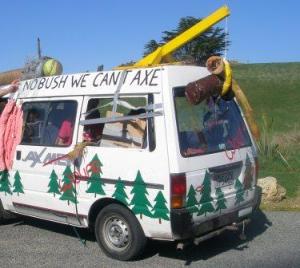 Several stopped at Moeraki. Their occupants looked tired but sober.

From what we’d seen, the Undie 500 hadn’t been undone by alochol-fulled foolishness. But when we caught up with  the news: we realised we’d obviously seen only the better behaved bits of the weekend:

Police arrested between 50 and 60 people. This follows the 20 arrests made on Friday night. The weekend’s violence and disorder saw the highest number of arrests in recent years.

It’s not the Undie 500 by itself, but students say:

Students from Otago believe that the tradition of the Undie 500, even if it didn’t start with bad intentions, will continue to attract people that want to riot. . .

. . . Jason Bay (21), a second-year management student who organised a sausage sizzle on Castle St on Friday night, believes that “[the students] just reach a certain degree of drunk after which you either get violent, or let nothing in the way of stopping you partying.

“I think the cops did a good job overall, but they can’t always distinguish who are being dickheads or who just want to have fun.”

It’s very difficult to distinguish the dickheads from the people just wanting to have fun in this ODT video. But those who end up in court are likely to find the judge puts most of them in the former category. 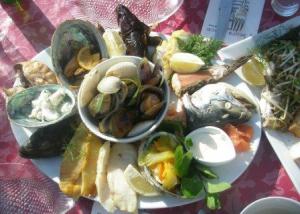 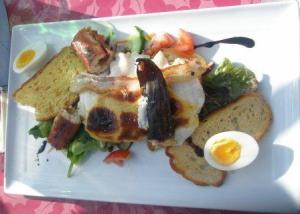 Secret Garden – You Raise Me Up

The song was familiar but I hadn’t heard this version until yesterday when it was chosen to be played as the coffin left the church.

(There was a technical hitch and it didn’t play then, but we listened to it afterwards).

You Raise Me Up by Secret Garden:

music | Tagged: Secret Garden, You Raise Me Up, YouTube |

It got a mention in this morning’s September 13 in history post, but because there was no photo it didn’t get the prominence it deserves.

Today is the 76th anniversary of Elizabeth McCombs’ election to parliament.

New Zealand women gained the vote in 1893 but it took until 1933, when McCombs was elected to the seat of Lyttelton in a by-election following the death of her husband who’d been the sitting MP, that we got our first female MP.

It took another 65 years – until December 1998 – to get our first female Prime Minsiter – Jenny Shipley.

McCombs died two years after her election and her son Terence then won the seat.

“There was no coup on Rowling.”

He was referring to Jim Anderton but it could just as easily apply to Phil Goff.

Fed Farmers do not cosy up to Labour

The headline says: Fed Farmers cosy up to Labour.

Federated Farmers, usually considered an ally of the National Party, has come to a Labour Party annual conference for the first time.

Feds doesn’t cosy up to Labour and it’s not an ally of the National Party.

Feds is New Zealand’s leading independent rural advocacy organisation. The Federation advocates for farmers and the role of farming in the modern New Zealand economy.

Unlike unions it is not aligned to nor an ally of any political party.

It may have more in common with parties towards the right of the political spectrum than those on the left because the former have more respect for property rights and a better appreciation of free trade and a freer economy.

But having things in common doesn’t make it an ally.

Feds is stronger because it is not allied to any political party. It’s there to advocate for its members and lobby in their interests. To do that effectively it engages with a variety of organisations, including political parties.

That’s not cosying up. It’s getting its message across to influence policy on behalf of its members but not trying, as unions do, to advance the organisation’s own political agenda.

When you’re the president of a party which is trying to drag itself out of the poll doldrums it’s not a good idea to attack the media.

He criticised the country’s three main daily papers for editorials supporting the Social Development Minister, Paula Bennett, after she revealed the details of two beneficiaries’ incomes. The women had made headlines for criticising government policy.

Mr Little called the editors who published the pieces “a disgrace” and said they had no place in an organisation such as the Commonwealth Press Union. He says the affair demonstrated how fragile freedom of speech is and what Labour is up against in trying to get balanced media commentary.

Pointing out the fragility of freedom of speech reminds us yours was the party which passed the Electoral Finance Act.

That’s either an act of sabotage or it’s stupid. Neither of those is a good look for a party president.

122 The building of Hadrian’s Wall began.

1953 Nikita Khrushchev was appointed Secretary General of the Communist Party of the USSR.