Still in Spain, still with Joaquin Sabina, this time with Ana Belen singing A La Sombre de un Leon (in the shade of a lion).

We heard people chatting, noticed a queue then smelt something frying.

It came from the churro van which operates on Sunday mornings and most summer evenings.

They’re made from dough which is piped into boiling oil and served with sugar or chocolate – a bit like long, skinny doughnuts. 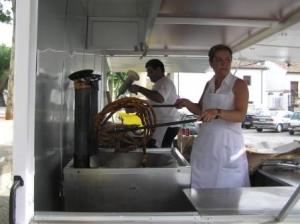 Travelling in Europe always reminds me how fortunate New Zealand was to have been settled by the British who came from a democracy and established another in their colony.

Europe is far older than us but many countries here are much newer to democracy than we are.

It’s only 34 years since Franco died and it was a couple of years later that democracy was established in Spain under a constitutional monarchy.

Further east democracies are much younger and some countries have yet to attain it.

Former British ambassador to Moscow, Tony Brenton, sees a role for established democracies  in fostering democracy in countries where it is incipient or endangered. He also sees a role for a Democratic Club and comes up with a simple requirement for membership:

A country must be willing to allow independent international observers to attend and report on its elections.

. . .  Even countries with such impeccable democratic qualifications as the UK might have to modify electoral law to allow observers full access to the balloting process. And the sourcing of observers would itself have to be watched. There are tainted sources, but also excellent ones such as the OSCE (Organisation for Security and Co-operation in Europe). The core concept, however, could not be starker. If you hold an election judged by international experts to be free and fair, you are a democracy. And if not, not.

It would have been interesting to see if a country with impeccable democratic qualifications such as New Zealand would have passed this test with last year’s election under the Electoral Finance Act.

We can be thankful it has gone but it would be a good guide to keep in mind this criteria when designing the legislation which will replace it.

Imagine the shame if we didn’t qualify! That and the desire to be part of an exclusive, albeit essentially toothless, club is one of the things which Brenton thinks might help foster democracy.

That is a worthy aim. The international community has a real interest in the spread of democracy to those places yet to gain it because ii is not only better for the people in the individual countries, it helps make the world a more stable place.

If a Democratic Club helps encourage democracy then it’s definitely worth promoting.

A British midwife reckons women should go through childbirth without pain relief because it helps them bond with their babies.

In an article for a medical journal, Professor Denis Walsh describes childbirth as being a rite of passage and is calling for maternity units to stop giving out pain relief and let expectant mothers “work with the pain”.

He says normal labour and birth prime the bonding areas of the mother’s brain more than caesareans or pain free birth.

Passing quickly over the observation that he’s a bloke and therefore won’t experience labour pains we get a woman’s point of view:

“I don’t think that you have to experience immense pain to just be able to be a good mother,” she says.

On claims that epidurals can threaten the mother-child bond, Ms Basu questions how a father can bond with his child if that were the case.

Had it not been for an emergency casesarean my daughter and I would probably have died. My other two babies were also born by casearean and I find the idea that I loved them any more slowly or less because of that offensive.

Being dead would definitely interfere with the bonding process. Suffering intense, unrelieved pain might be more likely to interfere with your ability to bond at least as much if not more than pain relief too.

We can be thankful that maternity services have moved on from the days when women were told to lie back with their feet in stirrups, do what the doctor told them and drugged to the eyebalss while doing it.

But suggesting we go back to no pain relief at all is several steps too far.

Every birth is different, every woman has a different ability to manage pain, not all the pains of motherhood come before the birth.

Good ante-natal education and preparation can help women manage labour pains better but telling women they shouldn’t have pain relief at all and making them feel guilty for doing so is taking us back at least a century.

A TV3 news item on the issue is here. It’s worth watching for the expression on the announcer’s face as she points out the expert is a man.

Can you please members and voters?

Can  apolitical party keep its members and voters happy?

The question came after this comment by  Dutchie Down South prompted a lively discussion on the issue.

A party’s first responsibility is to its own principles and through them its members.

In a broad church party like National, there is a wide range of views on many issues, but if members disagree with the principles then they ought to look for another philosophical home.

A party must stand on a firm foundation of its principles if it is to attract and keep its members and if it is to last.

Having said that, it must also attract voters. Under MMP that requires an ability to be flexible with policies which may mean swallowing dead rats.

National has done this with Working for Families and interest free student loans.

WFF may be the only way to help low income wage earners but it’s bad policy to turn middle and high income earners into beneficiaries. I hope the party will come up with a way of offering a better alternative at the next election but accept that it was too risky to go into the last one saying they’d scrap it altogether.

National had a better policy for helping students for the 2002 election but we lost and that’s why the interest-free rat was swallowed. That doesn’t preclude the development of an alternative which could be attractive to voters and sits better with National’s principles which the party could offer before the 2011 election.

Accepting the need to be flexible and stomach a few deceased rodents isn’t an argument for government at any cost. It’s accepting the reality of politics which means you may have to give a little to make some gains.

The Greens provide a good example of what happens when you don’t bend. They’ve marooned themselves on the far left and in spite of being the oldest of the wee parties in parliament have yet to make it in to government. Contrast that with the Maori Party which many thought would never coalesce with National but in just their second term in parliament are part of government and have already made some real gains.

A party which promotes independence and self reliance is always going to attract people with strong views which will not always be in accord. That’s a sign of strength rather than discord because it means there will always be healthy debate.

It also recognises that no-one member will always agree with absolutely everything his/her party does.

That applies as much to the leader as anyone else. Sir Keith Holyoake was asked how he coped with differences between his views and the party’s.

He said he was 100% behind 60% of his party’s views, there were about 30% that he was less enthusiastic about but they weren’t die-in-a-ditch matters and given that, he could agree to disagree over the other 10%.

When all else fails, it helps to remember there are no miracles in politics and it’s better to achieve something in government than nothing in opposition.