Saturday’s recipe is a day late and I’m cheating this week by linking to it.

A skinny Chocolate Brownie sounds like an oxymoron and often less of the ingredients we’re supposed to eat less of sacrifices taste and texture.

The Healthy Food Guide’s Chocolate Brownie is a delightful exception to that. It’s lowish in fat and sugar but still tastes delicious.

The recipe is here.

I sometimes use hazel nuts instead of walnuts.

When we left our hotel at 6am on Friday morning the temperature was about 22 degrees and La Rambla was almost deserted.

There were just a few people finishing their night out and a few starting their day. One of the former included a young man, wearing nothing but a nonchalant look.

When we got back a couple of hours later it was starting to come to life again.

By mid morning it was fully alive with people and lined with cafe tables and chairs, stalls selling souvenirs, flowers, birds . . .

At 6pm the temperature was well above 30 degrees and the boulevard was crowded with people of all ages and a wide variety of nationalities.

When we went for a walk at 6am today (Saturday) La Rambla  had quietened down but there were still a few hundred people milling about and only a couple of those we saw appeared to be the worse for alcohol.

Not just another routine announcement

The people who give the obligatory pre-flight announcements on planes always start by asking people to pay attention, even if they’re frequent flyers.

But how many do?

Even today when we were in an Airbus from Barcelona to Seville, I was conscious of all the concerning news about these planes, and trying to test my Spanish listening comprehension I gave the briefing only cursory attention.

Perhaps if the presentation had been delivered this way, it might have made a difference:

Love is in the House

Lockwood Smith became the first Speaker to be married at parliament, when he and Alexandra Lang exchanged marriage vows yesterday.

Smith described their romance as a fairy tale. I do hope that means they’ll live happily ever after.

The reintroduction of subsidies in the EU and USA and the relatively high value of the New Zealand dollar are being blamed for another fall in the price of milk in Fonterra’s latest globalDairyTrade auction.

The 3% fall took the price to a little below the long term average.

This is bad news for dairy farmers who will be waiting anxiously to learn if the auction price will impact on the forecast payout for the new season’s milk.

Regardless of that, they will be having another look at budgets to trim any fat out of their systems and that will have an impact on the people who work for, contract to, supply and service them.

The impact of any decrease in the forecast payout won’t just be felt in the country and provinces it will also spread to the cities because of the large party dairying plays in the New Zealand economy.

It’s not all bad news, though.

Downward pressure as a result of decreased global prices will be difficult in the short term. But it will redress some of the unsustainable costs which have crept in to the supply chain and that in turn will make dairying stronger in the long term.

A wander around Barcelona made me wish I knew more about architecture.

The city was founded in about 230 BC and it’s still possible to see remains of buildings from Roman times on.

Among the relatively recent buildings is this one on La Rambla: 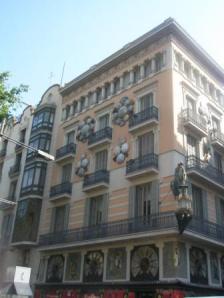 This one is a a block away from the Placa de Catalunya on Passeig de Gracia:

Further up the block is Gaudi’s Casa Batllo:

And then there’s La Pedrera: