It wasn’t all pain and shame in Dunedin at the weekend – a New Zealand team won one game.

Dave Gee has a commentary and pictures (rugby balls strategically placed will spare any blushes).

BOTW at the concert

Paul Henry and Peter Williams were luke warm on the Simon & Garfunkel concert when discussing it on Breakfast this morning.

I can understand why because while we enjoyed it, Art Garfunkel and Paul Simon are both 67. Their voices aren’t quite what they were 30 years ago and would be more suited to a smaller, more intimate venue. But that of course would mean fewer people and therefore either much more expensive tickets or much less money made.

Note to the organisers: playing Frank Sinartra as we came in wasn’t the best way to warm up an audience for Simon & Garfunkel. Given the programme talked about the influence the Everly Brothers had on S&G, music from them and their contemporaries would have been more appropriate – and enjoyable.

That said, Simon & Garfunkel sang all the old favourites we wanted to hear, the musicians were fantastic and even though they’re not the young men we remembered, they’ve still got a touch of magic.

The Stuff review is here.

The Herald review is here:

Bridge Over Troubled Water was always going to be A Moment. But as Paul Simon and Art Garfunkel traded verses on pop’s greatest consoling anthem towards the end of this first show of their Auckland two-nighter, it became Really Quite Something Else. The sound system – possibly overcome by its own electronic lump in the throat – gave out, leaving just the stage-sound and a slighty confused looking Simon and Garfunkel.

The crowd took over. And just as it built to its final crescendo, the sound came back up. Big finish. Aaah. Sigh.

“That was the nicest thing an audience has ever done for us” remarked Garfunkel.

And Bits On The Side  took a video of  Bridge Over Troubled Water when the sound system went and the audience took over (pity that the bloke close to the recorder had more enthusiasm than tune).

Nathan Guy has been appointed a Minister oustide Cabinet.

Guy is a dairy farmer who entered parliament as a lsit MP in 2005,  won the seat of Otaki last year and has been Senior Whip.

Worth was also the Minister for Land Information New Zealand and that responsibility now goes to Maurice Williamson.

Making success of socks by subscription no mean feat

The answer to the question of where even socks go leaving us to put our best feet forward in the odd ones which are left continues to be elusive.

Blacksocks.com doesn’t have an answer to the question but it does have a solution to the problem: the sockscription.

You choose they socks you want and how often you want them and the company mails them to you. The theory is that, providing you choose the same make, style and colour you never have to worry about odd socks again because you keep getting more the same.

But why wouldn’t you just buy matching socks yourself at the local store?

. . . many people can also buy cheap watches but they spend thousands of dollars for quality. He’s Swiss, so I concede the point.

He boasts about Blacksocks’ yarn-testing methods in northern Italy, says Blacksocks are cheaper than other brand-name socks, and notes that delivery is included in the price.

Without years of wear, it’s hard to fully test this system.

Blacksocks has 50,000 active customers, and 100,000 former customers. “Often they have too many socks and they decide to quit the brand,” Liechti acknowledged.

He may be right and I have to give him credit for making a success of a business like this which is no mean feet feat.

But my Presbyterian upbringing still struggles with the concept of paying for something which isn’t difficult to do for yourself, especially when there’s an even more frugal alternative: embracing odd socks as a natural phenomenon and wearing mis-matched ones as a fashion statement.

Meat prices positive but costs up too

Westpac and National Bank forecasts both paint a positive picture for meat in the next couple of years.

The only threat to meat prices appears to be the exchange rate, but the National Bank, in its Rural Report publication, said there was no reason the New Zealand dollar should stay high given the country’s high debt, large and ongoing current account deficit, and low to no economic growth.

It forecast two years of easing to about US49c before increasing to US60c.

Lamb prices have defied predictions of doom even in the face of a relatively high dollar, partly because of a drop in the ovine population after droughts in Australia and here. The large number of dairy conversions in the past couple of seasons have also led to steep falls in sheep numbers.

While supply has dropped, demand has been steady or risen.

Farmers would also benefit from meat companies competing for lamb.

Some commentators were expecting a decrease in dining out as the recession bites to dampen demand for lamb but it appears any drop in orders from resaturants has been more than compensated for by increased sales at supermarkets as people rediscover the joys of home cooking.

Beef prices are a little more uncertain although reduced numbers after a big kill in the USA last season and on-going drought in Argentina will impact on supply.

Prices are only one half of the business equaiton and while they have gone up so too have costs.

The biggest rise was in fertiliser which went up 33.8%;local body rates increased 5.6%; interest rates dropped by 6.7% and fuel prices dropped 14.2%.

That compares with consumer prices which increased by 16% over five years.

If interest is excluded the underlying rate of on-farm inflation in the past year was was 10.7 per cent compared with 9.8 per cent for the previous year. 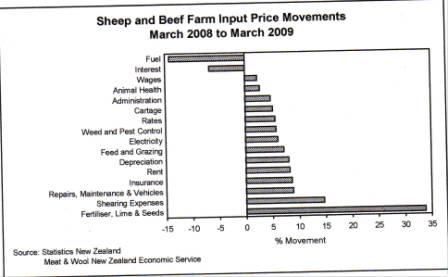 Business was the winner

The All Blacks lost but the ODT reports Dunedin businesses won with the influx of rugby fans bringing millions of dollars into the city.

I was down there on Friday and many of the shops had got into the spirit of test weekend by dressing their windows in black and white and/or red, white and blue.

One of the advantages of being a smaller city is that an event like a test makes a big impact. In larger cities major events aren’t so noticeable because its more difficult to motive larger numbers and the influx of visitors is a smaller percentage of the usual population.

1. What did Simon & Garfunkel call themselves when they recorded their first top 50 hit, Hey Schoolgirl, in 1957?

2. Who said:  Too often the desire for peace has been expressed by women while the stewardship of the mechanisms which are used to attempt to secure peace in the short and medium term are dominated by male decision-making structures and informal arrangements. This must change.

3.  Who wrote Chance Is A Fine Thing?

4. Which city would you be in if you were standing in the Plaza de Mayo and looking at the Casa Rosada?

5. Which is New Zealand’s deepest lake?