Farmers’ concerns about  world commodity prices contributed to an increase in those expecting the agricultural economy to worsen in the next 12 months.

The latest quarterly Rabobank Rural Confidence Survey shows 33% of farmers expect the agricultural economy to deteriorate in the next year, up from 29% who had a gloomy outlook in November last year.

The number of farmers expecting stability dropped from 44% to 38% but there was a slight increase in those expecting an improvement, 27% compared with 26% in the previous survey.

Sheep and Beef farmers’ outlook had improved and dairy confidence had stabilised.

The survey was taken before last week’s announcement from Fonterra of a 10 cent increase in the forecast payout.

The last two on-line auctions for Fonterra’s globalDairyTrade have shown a slight improvement in price, the next one is scheduled for tonight.

Sheep and beef farmers were more confident with 74% expecting conditions to improve or stay the same compared with 70% in the previous survey and only 23% expecting a deterioration in the agricultural economy.

Uncertainty about commodity prices was the factor cited most by those who expect conditions to deteriorate and improve.

Farmers were more optimistic about their own businesses than about the rural economy in general.

The difference was most marked in sheep and beef and mixed farmers with 23% expecting the rural economy to worsen but only eight percent predicting things to get worse on their own farms.

Farmers’ investment intentions remained relatively robust, the survey showed, with more than half of those surveyed, (57%) indicating they would maintain the same level of investment in their farm enterprise, while 22% expected to increase investment. 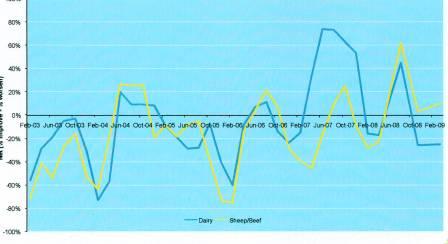 It may be crystal ball gazing but confidence is important because farmers who aren’t confident about their own businesses stop spending which impacts on the people who work for, contract to, supply and service them.

This entry was posted on Tuesday, May 5th, 2009 at 9:28 am and is filed under agriculture, economy. You can follow any responses to this entry through the RSS 2.0 feed. You can leave a response, or trackback from your own site.