April is poetry month, so I’m aiming for at least one poem a day rather than just one on Friday (though I have to admit yesterday’s from Dr Seus was there by coincidence because I hadn’t realised it was poetry month at the time).

A friend rings to tell me

on all the old thermal underwear

and is going to hang the lot

on a fence on the West Coast.

I can’t think why

except that it’s his way

of broadcasting my alleged

and bringing it to the attention

of the wider world. Something

‘You live in the coldest place

When he hangs up

and look at the bunches

I planted in the shade

of my dry stone wall

five months or more ago.

They are still in bloom

in April, in our crisp

these flowers, I have

no hesitation in saying:

they are the last I have.

There is no poverty in them,

Of all the many talents I lack, the one I most regret not having is the ability to sing.

But maybe there’s a place for me here:

If you love to moan and you think you can sing, then have we got a choir for you.

Actually, you don’t even need to be able to sing, but you must be prepared to vent your anger, moan, whine or complain.

The Complaints Choir is a global phenomenon dreamt up in Finland and first trialled in England. Now it is New Zealand’s turn, and it’s got the backing of one of our top musicians.

It gives a whole new twist to Song Sung Blue.

If you want to hear what it’s about, pop over to Campbell Live.

The Falklands vs Las Malvinas

The British call them The Falklands, the Argentineans know then as Las Malvinas  and it’s 27 years ago today that Argentina invaded those bleak islands in the South Atlantic.

I was working in London at the time and watched the jingoistic response from several quarters, including much of the media ,with a mixture of fascination and horror.

At first there was almost a sense of celebration, some people even started organising sing alongs to revive the hits of World War II.

The mood was more sombre once the dead and wounded started returning and friends in Argentina have told me of the sadness there as they watched young lives lost and many soldiers maimed by dreadful injuries.

I don’t pretend to understand the history and politics. But a friend who shore on the Falklands for several years says the people he met were definite about wanting to be British and feelings still run high in Argentina as this sign, which we spotted outside a military base shows: 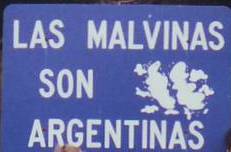 Another milkshake in order

Another celebratory milkshake is in order as Fonterra’s auction GlobalDairyTrade has registered its second consecutive price rise.

And this shows the whole milk powder price since August 2004.

The auction, which sells around 10% of Fonterra’s total whole milk powder output (WMP) to global sellers, saw an overall price rise of 3.5% to $US2235MT at 1am (NZ time) this morning.

This follows last months auction which was the systems first ever price rise, of 16.6% to $US2158MT, after bottoming out  the month before at $1851MT.

Prices have fallen 51 percent since the company began the monthly sales in July.

Is it a blip, or is it the start of an upward trend which will vinidcate Fonterra’s decision tos tick with the auction system in the face of widespread criticism it was depressing the market?

Last word on that passage to India

At worst, Mr Worth, a specialist in the niceties of constitutional law, would be naïve to pretend his role as Internal Affairs Minister would not give him VIP treatment in India – a country where business and politics go together like curry and rice.

Gibson gives background and analysis which can only be appreciated by reading the unabridged version of his comments so I’ll leave it there.

We’d had a wonderful day visiting a farm in North Canterbury and I had good intentions of writing a thank you note.

A real one, on a card or pretty paper. One that requires an envelope.

I had just the right card which I knew would amuse our hosts: 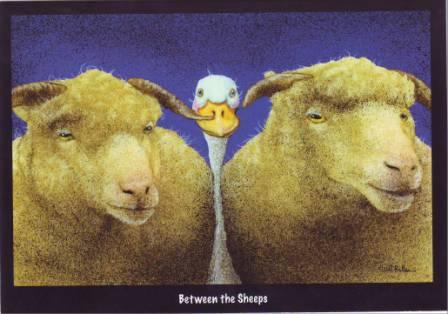 But that would have required finding their address and a stamp and remembering to post it so I sent an email instead.

I love getting real mail and take pleasure in sending it but it’s just so much easier to send an electronic message and that’s no doubt one of the reasons behind the expected redundancies at NZ Post:

Annual mail volumes for NZ Post, a state-owned enterprise, have fallen about 30 million from a billion items.

Mr Fenton was reported to have given a state-of-the-business briefing, saying the decline in mail volume was “unprecedented”, with revenue down and costs rising.

It’s not only thank you notes and other personal messages which aren’t going by snail mail. The number of invoices and cheques we send and receive by post has declined markedly as bills are sent and paid electronically.

Just as jobs for horse breakers and farriers were lost when cars replaced horses, fewer people are needed to deal with the post now so much more correspondence and business is conducted via the internet.

Joanna Hunkin won the Heritage Hotels Award for the best travel article written about New Zealand in the annual Cathay Pacific Travel Media Awards for her story Playing Cowgirl which was published in the NZ Herald.

The story was about Dome Hills, a North Otago high country station which offers lodge accommodation and the opportunity to enjoy the hill country.