A cafe where topless isn’t referring to a cup without a cover  makes me wonder what sort of  people want bare breasts with their coffee.

Contrary to what critics of the change in employment law say, there is very unlikely to be a lot of people who are asked to go within the 90 day period.

The time and cost of recruitment and training, even for low-skill jobs, means that once workers are on the pay roll employers almost always want to keep them.

There are exceptions to this with workers who aren’t up to the job or simply don’t fit into the workplace and that last point is very important because this law is not just about lowering the risk for employers when hiring new staff. The trial period will also help to maintain a safe and happy workplace for other employees because one bad employee can upset other workers and make their jobs more difficult or less enjoyable.

A bridge across the divide

Once upon a time, not so very long ago almost everyone in New Zealand who didn’t live on a farm had friends or relatives who did.

That meant is wasn’t only country kids who grew up knowing that milk, meat and other foods don’t originate in supermarkets.

It also meant they had the fun of climbing haystacks, feeding pet lambs and were familiar with activites like shearing, milking and harvest.

Farming was important and so were farmers – they were plentiful in parliament, what were then borough and county councils and various other boards and organisations.

Not so now. Farm amalgamations mean there are fewer farmers and the rural population is very much a minority – you only have to look at the difference in the size of electorates to see how much further you have to go to find the 57,000 or so people needed to form an electorate in the country compared with cities:

Fewer farmers and fewer people who know them has resulted in a widening of the rural-urban divide and a growing lack of understanding of farming as an industry and its continuing importance to the economy.

Urban-dominated bodies make laws and rules which don’t always take into account the realities of farming and one-size fits all legislation that might work in town doesn’t always in the country.

Federated Farmers has decided that one way to provide a few planks on the bridge over the urban-rural divide is to invite town people on to working farms. That’s the motivation behind today’s Farm Day  when 26 farms throughout New Zealand are opening their gates to the public.

The weather isn’t co-operating everywhere but it often doesn’t with farming. And if some of the visitors go home with a bit more mud on their footwear than they anticiapted, they’ll have learnt a little more about the realities of life and work in a business that operates rain or shine seven days a week.

It’s St David’s Day and the patron saint of Wales  is not nearly as well known as the other David, immortalised by Michelangelo.

The statue normally stands in Florence, but it’s been on loan to the USA.

Travel arrangements and security for such a valuable work of art were expensive so the visit required sponsors which is how several fast food companies got involved .

The art community wasn’t enthusiastic about mixing art with fast food and you can see why: 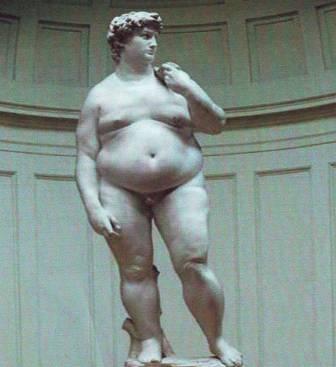 Is it really greener and does anyone want to find out?

Dark greens  have long been campaigning on the environmental evils of disposable napkins but now they’ve gone a step further – reusable cloths instead of loo paper.

Should you have the stomach for it you could follow the link above for instructions on how to store clean and used cloths and then comes this advice on laundering:

And that’s raises the question – would all the energy, water and the production and disposal of additives requried for the washing and drying be any better for the environment than loo paper?

I don’t care what the answer is because resuable bum wiping cloths are several green steps too far for me.

. . . there’s smokers and it seems to me the study which found children whose parents smoke are more likely to take up the habit than the off-spring of non-smokers is stating the obvious.

The Harvard University study published in the American journal Paediatrics found that teenagers are three-times more likely to start smoking if their parents do.

“It’s telling them that smoking is a fairly normal thing to do, it gives them the impression that it’s quite acceptable,” says ASH’s Ben Youdan.

Not only normal, is it possible they’re also deseniitised to the smoke and smell so it doesn’t seem as unpleasant to them as it does to children who grow up in non-smoking households?

Alhtough it was common for people to smoke not only in their own homes but in other people’s when I was a kid neither of my parents smoked and I always hated the smell of cigarette smoke so much I can put my hand on my heart and say I’ve never, ever had even a puff.

I do have other vices but the whole idea of sticking something that smelt so revolting into my mouth and breathing in has simply never appealed.

Because of that I’m pleased it’s not just illegal to smoke in enclosed public spaces it’s also socially unacceptable to do so in most private ones too and I’ll give the credit for that to the previous government.

I never saw this particular legislation as an example of the nanny-state. It’s more an OSH requirement to protect bar staff and patrons not very different from ensuring farm workers who deal with sprays aren’t exposed to any drift.