Neatness not a natural state

Some are born neat; some achieve neatness and some have neatness thrust upon them.

Those who are orderly by birth or habit find it difficult to tolerate or even understand the rest of us who are not and I don’t blame them because untidiness irritates and confounds me too. However, while I like neatness and know it makes life much simpler and less stressful it’s not a state which comes naturally to me.

I blame it on being a child of children of the depression who had been brought up with the injunction waste not, want not. Let’s face it anyone whose mother washed, dried and reused plastic sandwich wrap decades before recycling became trendy is going to have a problem determining what’s wanted and what’s waste.

This helps to explain why I can’t throw out left over food straight away but must pop it into the fridge and wait until it dies quietly first. Similarly I can’t get rid of other things as soon as there usefulness or beauty has passed.

Instead they must serve their time in storage then only after the passing of months or even years has led to a further deterioration in both appearance, and value and when something with a more pressing need for cupboard space forces them out can they be discarded.

This totally irrational and unnecessary determination to keep things which have long since passed their useful-by dates means that neatness is a rare and fleeting state with me and the last time I came as near as I even get to total tidiness on the domestic front was some months ago when a spruce up of the office was thrust upon me by some relatively minor alterations which resulted in significantly more storage space.

My farmer, encouraged by the addition of new places to put things and with some not insignificant assistance from both our office fairy and accountant cleared up his territory which made the contrast with the disorder on and around my desk even more marked.

Accepting the inevitable I began the massive job of turning the chaos of my corner into some semblance of order. Two and a half days later the desk was clear, drawers were tidy, shelves were stacked in an orderly fashion, loose bits of paper were filed securely and the fifth load of rubbish was burning in the drum.

Encouraged by the novel experience of being able to find what I wanted at first glance I moved with the enthusiasm of a new convert from the office to the hall cupboard and set about tidying that too. Then I tackled the bedroom where anything that hadn’t been worn for more than a year was taken out to be given to an op-shop.

Fired with success in this quarter I advanced with missionary zeal to the spare room where a similarly cathartic process took place. From there I strode with determination in my heart and a large rubbish bin in both hands to cut a swathe through the mess in the kitchen, living room and finally the laundry.

My excitement over the resulting and unusual sate of order from one end of the house to the other was boundless. I not only knew where things should be, I could be totally confident that that’s where they would be.

With the house much neater life became much easier, but alas the tidiness was temporary.

Slowly and insidiously chaos crept back, furnishing me with the proof that for those of us on whom tidiness is thrust the real challenge lies not in attaining neatness but in maintaining it. 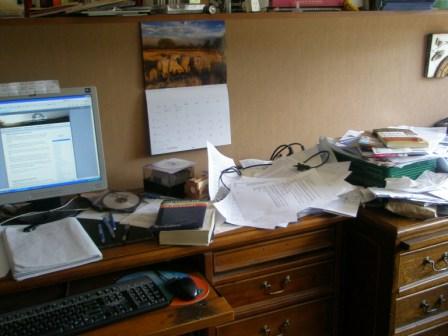 This entry was posted on Thursday, November 27th, 2008 at 11:08 am and is filed under domestic, smiles. You can follow any responses to this entry through the RSS 2.0 feed. You can leave a response, or trackback from your own site.

6 Responses to Neatness not a natural state