TV 1 is taking the political pulse of the nation on an election road trip.

Tonight they stopped in Oturehua and found 100% support for National.

That isn’t anything to get excited about however, because they only asked three people.

The last time I stopped in Oteurehua was in January for a National Party branch AGM. We adjourned to the pub which had a very good array of Central Otago wines which the publicans explained was a result of demand from cyclists on the rail trail.

Peters pushed for Glenn to be consul

TV 1 News has Ministry of Foreign Affairs papers which show Winston Peters pushed for Owen Glenn to be made honorary consul for Monaco.

Foreign Affairs chief executive Simon Murdoch wrote to Peters’ senior officials in April 2007 saying Peters had requested to appoint an expat of his choice as the honorary consul in Monaco.

The next day one of Peters’ senior advisors clarified that the name Peters put forward is Glenn’s.

By the end of August last year Peters was frustrated with the lack of progress.

He was pushing for New Zealand’s ambassador in France to meet Glenn over the posting, according to an email from the deputy secretary of Foreign Affairs.

The papers were only released after the intervention of the Ombudsman.

Guyon Espiner says that the documents show Peters lobbied hard for the appointment.

Glenn said in September that Peters had supported his bid for the position but Peters has always denied that.

National is to increase the number of prisoners learning industry-based skills  and parole will be refused for anyone who is eligible but chooses not to participate.

The party will also double the numbers receiving alcohol and drug treatment.

“For too many criminals, a prison sentence is just an enforced career break.

“It’s a waste of taxpayer money to let these people serve their time without challenging them to change their behaviour – only to release them and then throw them back into prison again when they re-offend.
“That will mean more victims, and it’s vital that’s changed.

“If we want to reduce crime, imprisonment should not be seen as only a punishment, but also as an opportunity to rehabilitate a captive audience through work, drug and alcohol treatment, and other programmes that offer alternatives to a life of crime.” 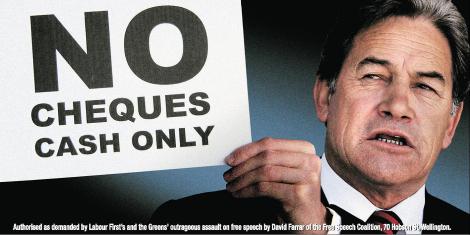 The Tauranage Special from the Free Speech Coalition.

One finger or two

I suspect that anyone much younger than I am might not realise that Winston Peters is mimicking WInston Churchill’s v for victory  in his advertising and may in fact think it’s an old fogey who doesn’t know how to give the fingers.

Whaleoil has another interpretation.

Sign on the front of Wanaka’s Red Rock bar:

Trouble is with MMP she could lose the election and still win power. That would be great for the country – yeah right.

Jane Clifton in the October 25-31 Listener:

. . . For the Government, the only way through it is hair of the dog: do more of what got us in the merde, and do it early and often.

Because here’s another incomprehensible shock from the Beehive: an emergency December mini-Budget. After months of increasingly frenetic and detailed spending promises from Labour we are now told the Government doesn’t really know how it’s going to proceed in its fourth term of office, and will need to revise its programme within six weeks of taking office. How? Well it’ll get back to us on that – after the election.

This is like sitting through one of those long, hype-rich infomercials . . . but when you get to the bit where the histrionic narrator says, “But wait! There’s more!” he never actually tells you what the “more” is. . . Actually with the Economic Abdominiser it’s more likely to be, “But wait,! There’s less!”

Voers are entitled to suspect that Labour will – more in sorrow than in anger, of course – rethink its recent tax cuts . . . Other reversals of fortune must surely be up for consideration – a later, slower phase-in for the universal student allowance, for instance – and even bigger borrowings might also be on the cards . .

Labour has put restrictions on itself in ruling out out curtailing existing bureaucracy, which leaves citizens and businesses to bear the brunt of whatever extra stringencies might be coming. National could justifiably come up with a retaliatory chant to “borrowing to fund tax cuts”, namely “borrowing to fund bureaucrats”.

They’ve said the election’s about trust and that’s the one thing we can trust them to do.

(A preview of the column is here, it will be on-line in full on November 8th)

A bloke in Napier took a brand new $22,000 Holden Clubsport for a test drive and slammed it into a power pole.

He then drove it for a further kilometre.

The ODT  thinks Labour’s Mahara Okeroa is vulnerable to the challenge from Rahui Katene who’s seeking the Te Tai Tonga seat for the Maori Party.

Community leaders spoken to in Otago said the Maori Party brand was “very strong” and that Mr Okeroa might as well have “dropped off the edge of the planet” as he had not been seen to be active in Otago for at least two years.

The electorate covers the whole of the South Island, Stewart Island and part of Stewart Island so is impossible to cover well in person. That makes media even more important but while I don’t know if he features in Maori media he’s rarely mentioned in other media I read, watch or listen to.

. . . until the election and Centrebet’s odds have shortened a little in line with the polls.