Plunket line and other winners

National has announced a $14m maternity care policy  which includes:

* Establish a voluntary bonding scheme that writes off student loan debt for graduate midwives who agree to work in hard-to-staff areas for three to five years.

* Subsidise re-training and refresher courses for GPs who have a postgraduate Diploma in Obstetrics and Medical Gynaecology (or equivalent), and who want to resume providing maternity care.

* Encourage clinical networks across regions to assist in the planning, delivery, and improvement of maternity care.

* Fund an optional meeting each trimester for at-risk mothers so they can discuss their care plan with their Lead Maternity Carer (LMC) and their GP together.  This is an estimated cost of $1.5 million per year.

* Work with DHBs to provide greater choice in birthing facilities, closer to home.

* Ensure mothers have the opportunity stay in birthing facilities longer to establish breastfeeding and confidence to return home.

Macdoctor posted on maternity care  before this policy was announced.

National has announced its maternity care policy  which includes ensuring mothers have the option of staying in birthing centres longer to establish breastfeeding and be more confident before going home.

I’m delighted with this because it’s really good policy and also because I can claim a wee bit of the credit for it.

Last year National Party members were invited to pitch a policy at regional conferences. I pitched on allowing mothers to stay in birthing centres until breastfeeding was established. It was one of four chosen from all the regions to be presented at the party’s annual conference where it was greeted with enthusiasm.

The health policy committee added it to all the others up for consideration, did the research, costing and other work needed to ensure it was practical and now here it is, one of National’s commitments if we’re in government.

The pitch I put was:

Winston Churchill said: “There is no finer investment for any community than putting milk into babies.”

He didn’t specify the type, but medical science and grandma’s wisdom agree that breast is best.

The benefits range from providing antibodies which help protect the baby to reducing the risk of some cancers in women.

END_OF_DOCUMENT_TOKEN_TO_BE_REPLACED

The decision John Key and Helen Clark made to not take part in a debate with the wee party leaders was vindicated by tonight’s TVNZ debate.

It was difficult enough to hear two of them speaking at times, it would have been a complete circus if there had been anymore people talking over each other, with more heat and less light.

“I haven’t heard a single bitter note” – Helen Clark said, finishing on the definsive, immediately after a personal attack on Bill English.

John Key  finished with a grin.

Your defining issue isn’t everyone else’s

He said he was mildly supportive but wasn’t particularly interested in it.

I was in my first job on a small town newspaper and reported on the tour so was well aware of the issues; I understand the importance of the tour and its part in our history and I never supported apartheid.

But I didn’t feel strongly about the tour because at the time I had other priorites.

I take it from John’s response that he felt the same.

I also agree with him that what someone thought about something 27 years ago isn’t nearly as important as what can be done about the many issues facing us now.

Did my ears deceive me?

I just heard someone on TVNZ say:

I’m always reluctant to criticise the police because I believe in upholding and supporting them?

Is this the same woman who left the police to go through a court case after they sped her from Waimate to Christchurch?

The biggest contrast between John Key and Helen Clark in the first couple of segments of the TVNZ debate is he smiles and she doesn’t.

He looks as if he’s enjoying himself and laughs when she talks over him. She looks wooden.

Oh and I think he’s doing better with substance too – but then I would. 🙂

Trust them to put politics before ethics

Labour’s decision to make political capital out of the financial crisis may be part and parcel of an election campaign.

But dragging the governor of the Reserve Bank governor Alan Bollard into their game is yet another example of the disdain Helen Clark, Michael Cullen and their colleagues show towards the convention of an apolitical public service.

The Hive thinks Alan Bollard should resign for not briefing National and sees the need for constiutional change.

Kiwiblog says Bollard’s decision not to consult other parties undermines confidence in the public service neutrality and then gets personal .

Roarprawn says Bollard has been compromised.

The Herald reports on some reservation National and Bollard have about the deposit guarantee scheme. 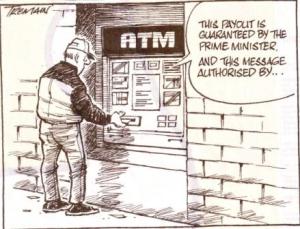 Discussions on law and order often talk about punishment but when Naitonal’s justice spokesman Simon Power spoke in Oamaru this afternoon he also addressed the importance of crime prevention.

He said this included addressing problems with health and education not only among those who get into the prison system but with children to keep them away from crime in the first place.

Otago MP & Waitaki candidate Jacqui Dean with  Simon after the meeting in Oamaru.

If only this was scientific

What do you think of Labour’s universal student allowance pledge?

Stuff polls are not scientific and reflect the opinions of only those internet users who have chosen to participate.

Mossburn residents have received money in the mail  with a message encouraging them to contact God on Friday.

The letter asks readers to accept the cash gift or use it for someone in need.

“Please consider these words from God,” says the letter, which is signed by “caring local friends” .

The identity of those caring friends was unknown by Mossburn locals or religious leaders spoken to by The Southland Times yesterday.

Most of us would think the headline is stating the obvious: Alcohol: Not good for the brain after all

The story which follows explains researchers decided to see if moderate consumption of alcohol which has been found to help heart health would also benefit the brain.

Their results show that tee-totallers lose less brain volume with age than drinkers do and the difference is greater for women.

I’d better not drink to that.

Invercargill MP Eric Roy wanted to stamp his image on his electorate, but NZ post said no. 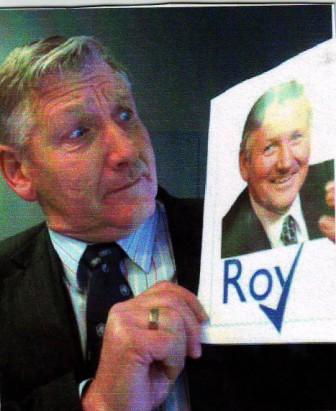 If it’s about buying votes then Labour’s promise to phase in a universal student allowance deserves the top billing it’s getting.

But if it’s what’s best for the people most in need and so for New Zealand National’s promise to spend $47m boosting literacy and numeracy should have been the lead.

This is the way the ODT  website ranks them:

Increased subsidies for the offspring of middle and upper income parents gets the top three headlines.

And seven stories down there’s the one which is going to help improve literacy and numeracy for young children, many of whom will be from poorer families.

The NZ Herald promotes seven other stories before it gets to the literacy and numeracy one and I couldn’t find a reference to it at all on Stuff’s Vote 08 election coverage page.

Never good time to be in opposition

Colin James thinks the next term is not going to be a good time to be in government.

It will be a difficult time to be in government.

But there is never a good time to be in opposition.

. . . until the election and we have a choice: National’s policy for improving literacry and numeracy or Labour’s   bribe for the children of middle and upper income parents.