While the idea is enough to provoke shudders of revulsion from your average ice cream lover, dairy farmers reacted angrily to the stunt yesterday, claiming that the group is undermining the dairy industry.

But the animal rights group Peta claims that breast milk would be “better for both consumers and cows”, pointing out the nutritional benefits of breast milk and highlighting the animal welfare concerns over dairy farming.

Bizarre as this sounds there is a precedent:

In a letter to Ben & Jerry’s co-founders Ben Cohen and Jerry Greenfield, it cites the example of chef Hans Locher, who recently announced that he will be serving soups and sauces made from 75 per cent breast milk in his Swiss restaurant. Mr Locher posted adverts in local villages appealing for donors, offering a rate of £3 per 14 ounces (398ml) for their milk.

Even if the women had the same checks on their health as our cows do, fresh from the breast  cuisine wouldn’t tempt me.

Take the place  which has put Moeraki on the map;

Pour in as many people as it can fit, spill extras outside.

Stir with a live musician.

Top up with fine wine including a delightful pinot gris from Ostler. 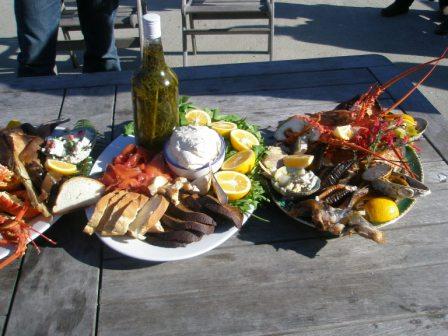 Add author Paul Sorrell, photogrpaher Graham Warman, the main character in the book, Fleur Sullivan and the book itself: 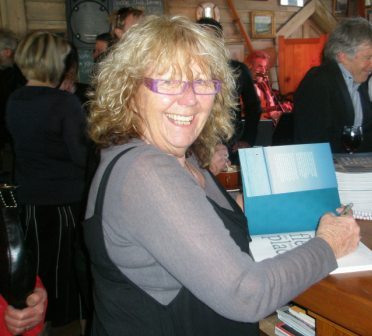 But that’s in spite of daylight saving not because of it.

We woke to a frost this morning and that white stuff on the Kakanuis is fresh snow which fell yesterday.

If you didn’t face the morning with your normal enthusiasm you’re not alone.

My eyes register what the numbers on the clock face say but the rest of me is firmly convinced it’s a whole hour earlier.

I understand the theory behind daylight saving and accept it in mid-summer but I have difficulty appreciating it in practice on a decidedly cool spring morning when I need every one of those lost 60 minutes to engender enough enthusiasm to get out of bed.

The cause of this inconvenience can be laid at the door of North Islanders.

If they had the sense to move south where we already enjoy long summer twilights they could have what they want without stealing an hour from our mornings.

Since they selfishly decide to stay put, we’ll have to endure these cold, dark dawns until our bodies catch up with the clocks.

It was bad enough when it happened at Labour weekend when we had the Monday off to help us adjust to rude awakenings, but those who think they know best have dragged the start forward to the last weekend in September.

It’s a little too early to enjoy the long evenings and a lot too soon to feel enthusiastic about losing an hour in the morning.

The only fool-proof way to take the sting out of the spring leap forward is to take a break where time isn’t important. Preferably somewhere warm like Fiji where you could lounge around in the sun then come home so refreshed that getting out of bed an hour earlier wouldn’t really hurt.

Unfortunately few of us have the time or money to make such an annual pilgrimage. We just have to stay home and put up with a week or two of discomfort until the confusion between body time and the actual time is sorted out.

If you have young children the mornings won’t be the only problem. It can take a lot of convincing little people it’s bedtime when their body clocks know perfectly well there are another 3600 seconds of play and story telling left in the day.

I always mean to prepare for the time change by going to bed 10 minutes earlier each week for the six weeks before it happens. That would mean by the time daylight savings was introduced my body would be in tune with the clock/

Unfortunately it’s a good intention which I’ve never got round to putting into practice. So every year I have the same struggle to adjust my inner clock to the outer reality. It’s like suffering from jet lag without having had the fun of a holiday.

As one who values sleep as only those who’ve had young children can, this isn’t something I find easy, and knowing that I’m going through it a good three weeks earlier than it ought to be isn’t helping.

They didn’t ask me

A Department of Internal Affairs survey shows 82% of the general public support the extension to daylight saving but only 54% of dairy farmers do.

It would be interesting to know if the approval was stronger in the north than the south.

A leaked memo, supposedly from Sanlu, suggests the company was paying to keep the story about poisoned milk quiet.

Fonterra says no-one on the board of the company, in which it has a 43% stake,  knew of this.

Radio NZ  has more on the story including a denial from Fonterra it will be forced to give up its share in Sanlu.

There were warnings in China

The New York Times gives a background to the melamine milk poisoning in China which confirms it shouldn’t have been unexpected.

The three page article which is worth reading in full lays the blame on the Communist administraion, the desire to look good for the Olympics and constraints on media which thwarted attemtps to publicise concerns.

Some dairy farmers interviewed this week in Hebei Province said it was an open secret that milk was adulterated, although many claimed they did not know that melamine was being used. Some dairies routinely watered down milk to increase profits, then added other cheap ingredients so the milk could pass a protein test.

“Before melamine, the dealers added rice porridge or starch into the milk to artificially boost the protein count, but that method was easily tested as fake, so they switched to melamine,” said Zhao Huibin, a dairy farmer near Shijiazhuang.

Mr. Zhao said quality testers at Sanlu took bribes from farmers and milk dealers in exchange for looking the other way on milk adulterated with melamine. “In this business, bribery keeps everyone silent,” he said.

This is why strict quality controls all along the production chain which we have in New Zealand are so important.

But quality controls can’t be trusted if there isn’t openness and a lack of corruption.