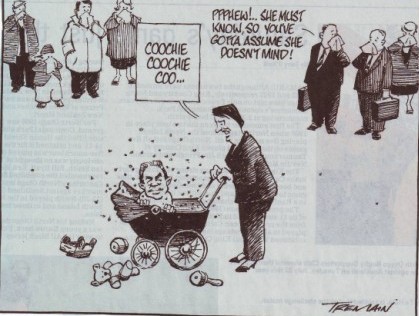 The ODT can smell it:

Indeed, contempt is a word many voters might well be employing to describe the poisonous state of affairs where the MPs’ behaviour and standards have sunk so low as to bring the very concept of the “people’s representatives” into serious disrepair.

The Timaru Herald can smell it:

To put Mr Peters out to pasture, as Prime Minister Helen Clark should have, would have been to admit Labour were wrong in supporting him. So the man who once made a show of shunning the baubles of office drifts to the end of this Government’s term still holding the baubles, but without the office. Enough said.

The Press can smell it:

So why is it that for the next two months or more, until the shape of the next government is known, he is allowed to retain his ministerial salary and the other perks of the job? The only answer is that it is still politically expedient for Labour to let him cling to the baubles of office.

The Tarankai Daily News  can smell it:

It’s a sweet lullaby of conspiracy and political back-stabbing, played on the strings of a David versus Goliath battle for survival; a lullaby perfectly pitched to filter out the clangs and bangs of common sense and truth and put the listener into a content, compliant trance over the next six weeks.

The NZ Herald  can smell it:

It is stating the obvious to say Winston Peters should have resigned as a minister some time ago. And that he should go now, after the censure delivered by Parliament’s privileges committee. He will not, of course, and, the New Zealand First leader may even see a silver lining in that dark cloud. The Prime Minister has said she will not reinstate him as Foreign Minister, but that he will remain a minister without portfolio. As such, Mr Peters is free to hit the campaign trail with the salary and perks of a minister but none of the responsibilities. This farce will end with voters having to deliver the Don’t Come Monday letter on November 8.

Michael Bassett  can smell it:

Overtly buying political influence by giving large donations to parties and murky private trusts like the Spencer Trust appears on the face of it to be corruption of a kind that has been foreign to New Zealand, and which is always likely to bring any Parliament into disrepute. When will these matters be investigated by the Privileges Committee? Why has Winston, who has always posed as a friend of the old and the vulnerable, been spreading tens of millions of dollars of public money on wealthy racing magnates who don’t need it, rather than on better health care and services for his supporters? And in particular, why has the Prime Minister been a party to all of this by allowing her ministry to fund Winston’s backers? There is much yet that needs unearthing about this whole murky business.

Colin Espiner  can smell it:

. . . it meant Labour and Winston Peters failed to pervert the cause of justice and will of the majority despite the most underhand of tactics. As I’ve said below in this post, Labour’s attempt to politicise the committee and discredit its findings was shameful – amongst the worst things the party has done in the past nine years, in my opinion.

We know Labour and New Zealand First can’t but we won’t know until election night how many of their supporters are prepared to hold their noses.

If you’ve been following my posts over the past week you may have noticed that I’m just a wee bit grumpy about the clocks going forward this early.

In support of that I offer the following evidence:

1) Dunedin’s forecast for the next few days:

3) I’ve just been talking to a friend at  Dome Hills who tells me it’s snowing there too.

4) Dutchie left a comment on a previous post to say he’d got stuck in snow while campaigning today.

It might be summer in the North Island but it’s not even late spring down here.

Sanlu to be sold?

NZPA notes media reports from Beijing which say Sanlu, in which Fonterra has a 43% stake may be sold to its rival Sanyuan Food Company:

Sanlu group may be forced into bankruptcy and taken over by Sanyuan, the China Daily reported.

Fonterra, the world’s biggest dairy trader, owns 43 percent of Shijiazhuang Sanlu Group Co., but to day told the Wall Street Journal that it hasn’t been approached about selling its stake.

“No one has contacted our people on the board about a purchase,” Fonterra chief executive Andrew Ferrier said.

. . . A  Sanyuan official, who refused to give her name, confirmed to the China Daily the company’s acquisition plans.

Sanyuan has emerged untainted in the recent milk scandal. As a result, its share prices have soared and sales skyrocketed.

Problems with products contaminated by melamine in the wake of the poisoned milk scandal have spread beyond China’s borders.

Baby cereal in Hong Kong and snack foods in Japan which contain Chinese milk have been found to contain melamine.

And baby animals  at the Hangzhou Wild Animal Park near Shanghai have kidney stones after being fed milk powder.

One of New Zealand’s most expensive exports, lactoferrin, which sells for about $500,000 a tonne, has been contaminated with melamine.

But food safety officials say they don’t know how the contamination occurred and are now looking at whether the melamine was in the raw milk.

The New Zealand Food Safety Authority thinks the contaminated lactoferrin might have come from more than one company. NZFSA direcctor of compliance and investigation Geoff Allen said:

“We’re still waiting for official results from all of the manufacturers of lactoferrin, so I can’t say which one is in and which one is out.”

Yesterday Mr Allen said the authority was considering any role which might have been played in the contamination by cyromazine, an insecticide which breaks down to melamine in mammals.

NZFSA has 24 livestock drenches and sprays containing cyromazine listed among registered agricultural compounds on its website.

“The possible contribution of breakdown products from cyromazine is being included in the investigations that are underway.’

Dr Allen had earlier confirmed that NZ lactoferrin sent to China had been contaminated with melamine. “Explanations for its presence in this case include leaching from plastic involved in processing or packaging, or other unintended outcome of the manufacturing process.”

. . . Dr Allen said the contamination was at low levels which did not present any health risk for consumers.

He questioned whether the melamine would be detectable once it was diluted when used as an ingredient in a finished product.

In June, NZFSA published a list of contaminant levels it will allow in animal products, and specified a maximum permissible level of cyromazine and melamine as 0.3mg/kg in sheepmeats, and 0.15mg/kg in poultry and eggs.

This is very different from the poisoned milk scandal in China but it is important that New Zealand food is checked to determine it contains nothing harmful.

The China melamine poisoning has raised awareness of what could be in food which is good as long as it doesn’t create needless hysteria over elements which won’t cause any harm.

The book Fleurs Place by Graham Warman and Paul Sorrell, published by Penguin is being launched at Fleurs Place tomorrow.

Fleur chatted to Kim Hill this morning, you can listen to it here.