The Research NZ survey  has generated debate at No Minister  and The Hand Mirror  over equal rights and equality and a post on the issue at No Right Turn.

The discussion reminded me of this Garrick Tremain cartoon which I cut out of the ODT several years ago.

My memory of what prompted the cartoon is a little vague but it had something to do with whether women would be admitted as members.

I don’t know what the upshot was then but am fairly certain membership is open to women now. 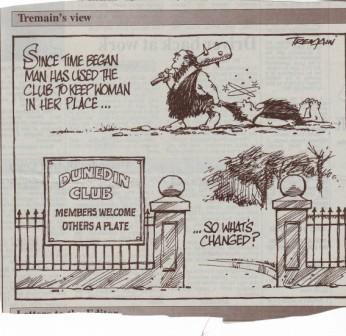 New Zealand First is setting its sights on younger voters  with a promise to introduce a universal student allowance. Winsotn Peters made the announcement in address to University of Otago students today.

“A universal student allowance would encourage more students into tertiary education,” he said.

“It would reduce the dependence of loans and the cycle of huge debt that many of our graduates face, especially those who seek the highest qualifications or choose careers in areas such as medicine.”

Do we need to encourage more students into tertiary education?

There are shortages of some skills, including trades which don’t require a univesity education, but I wasn’t aware of a shortage of students or graduates, in general.

As for reducing the dependence on loans, students do have some choices. They can take a gap year (or more) to earn money before they start university or part way through their studies; they can work full time in their holidays and part time during term; and they can take a strict approach to differentiating between necessities and luxuries to reduce the amount they need to borrow.

And paying more for the relatively short time they’re students and less for the long time most will be tax payers, is better for them, all taxpayers and the economy.

Wyomin’s Gone and Done It

This Friday’s poem had to be about women’s suffrage and I found Wyomin’s Gone and Done It here.

While we celebrate that New Zealand was the first country to give women the right to vote, in 1893, New Zealand women weren’t the first to vote. The Territory of Wyoming passed the Women’s Suffrage Act in 1869 and when Wyoming became a state in 1889 it retained the legislation.

WYOMIN’S GONE AND DONE IT
(State of Wyoming , 1889)
Wyomin’s gone and done it!
Why, they must be plumb insane.
There’s gotta be a reason….
maybe water on the brain.
They gave the vote to women.
They done it, God forbid.
God save our noble country
from the dastard deed they did.
They gave the vote t’ women.
They can vote just like the men.
That state’ll never prosper
or be the same again.
Them western states have always spawned
a crazy kind a’ breed.
I’ve long suspected Western folk
were smokin’ loco weed.

Wyomin’s gone and done it-
such a vile and devilish deed!
The pity is they ever taught
them females how t’ read.
Them cowboys ain’t the brightest.
Why couldn’t they at least
learn to keep their women
in their place, like men out East.

A female’s place is in the home
a’ carin’ for the men;
a’ cookin’, cleanin’, tendin’ kids.
That’s how it’s always been
Women just ain’t like us men.
They lack our common sense.
They ought t’ leave the vote to men…
it takes intelligence.
Wyomin’s gone and done it…..
passed a Suffrage Act somehow.
Them Suffragettes are all stirred up.
God help our country now!

Since Homepaddock is an equal opportunity blog and I’ve mentioned women’s suffrage day several times I feel duty-bound to point out that it’s International Talk Like a Pirate Day.

If you want to know more me hearties you’ll have to weigh anchor and yo, ho, ho, over to Life from Right Field, with or without the bottle of rum, for more details.

Labour’s school plus policy  will require everyone under 18 to be at school or in training.

National’s youth guarantee policy gives 16 and 17 year olds the choice of school, training or work. They can also choose to do nothing but won’t get a benefit while doing it.

Labour’s policy takes no account of the real world where there are some young people who don’t fit in the school system, can’t wait to leave, will buckle down and work but don’t want any more formal learning.

National’s policy recognises that one-size doesn’t fit all and that some people will learn better outside school and some are better in work than in a classroom.

We see quite a few of these on farms.

They’re sick of school, not interested in any other form of formal learning but they’re happy to work. Some of them will take up the opportunity to gain AgITO qualifications later and do well because they can see a point to what they’re learning but if they were forced into the classroom earlier they’d have dropped out.

Choice versus compulsion? No contest.

Another reminder that it’s the 115th anniversary of women’s suffrage in New Zealand.

National’s plan to bond some graduates who work as health professionals in areas of shortages is good but a universal student allowance would be better according to Auckland University Students Association president David Do.

Bonding graduates who stay in New Zealand and use the skills the taxpayer has helped pay for them to acquire in areas of shortages is far better use of taxpayers’ money than throwing more money indiscriminately at every undergraduate.

Almost all students will be better off in the long run if they pay a bit more towards their education for the few years they are at university than if thay have to pay more tax for the rest of their lives.

This is minor when compared with the milk poisoned with melamine in China but still very serious:

A young farm worker has been given a nine-month prison term for sabotaging a milk line in a Canterbury milking shed.

He was found guilty of several offences including injecting a drug for cattle into a milk line on the property of a former employer.

Attitude easier to change than law

No Minister  asks a question of feminists in response to the survey which found more than a third of women think they don’t have equal rights:

Is it that the survey company defined rights in a foolish way, that the respondents have a confused definition of rights, or just that a third of NZ women are into special pleading?

I’m a peopleist (not sure how to spell it) rather than a feminist because I think equal rights should be based on the acceptance that people are people and they are entitled to equality because of that not because they are part of a sub-set of humanity.

However, as I commented last night (four posts earlier) equality isn’t just about enshrining rights in law it’s about changing attitudes and some people still think some other people are lesser beings.

This doesn’t just apply to women and ethnic minorities, some middle aged pakeha men could sometimes argue that they’d been discriminated against because of their gender and ethnicity.

Take a look at the party lists. You can rightly argue that this positive discrimination is to improve the gender and ethnic balance because selection processes in the past deliberately or not resulted in a fairly homogenous parliament, but all else being equal a woman or someone who isn’t of full European descent is almost certain to find themselves in a better position than a man who is.

Back to the survey, I think everyone is equal under the law in New Zealand but psychosclerosis (hardening of the attitudes) prevents some people from accepting that and acting on it. So while all people have equal rights not all find equal acceptance.

Apropos of this is Adam Smith’s quote of the day at Inquiring Mind:

Apropos of the 115th anniversary of women’s suffrage in New Zealand:

The artist missed the gumboot – I think it should be second from the right.

No need to be down about depression

Jim Hopkins, freshly returned refreshed from a sojourn in Fiji finds a silver lining in the cloud of looming depression:

But suppose you had just returned from balmier climes to find such balminess besieging you, once you’d recovered, you might decide to suffuse your soul with some of the warmth and serenity you’d just left behind.

Heck, if there is another Depression we’ll all learn how to grow veggies again. Sunlight soap sales will rocket assuming anyone’s still making it.

The gummint might finally build some decent roads as part of a work scheme.

We could print a bit more money – it worked for a while in the Weimar Republic. (A wee tip for Dr Bollard: when folk start papering the sunroom with it, it’s probably time to stop!)

Houses would be cheap, especially the ones people walked away from. Sky might drop its rentals to retain hard-up customers. People would decide they really didn’t need cellphones. Ad-men would start buying their clothes at St Vincent de Paul and there’d be less adverts on telly!! Kids would make things instead of buying them.

And if, like most Business Editors, your office is a tiny room in the basement, you wouldn’t have far to fall when you jumped!!!!! There!! You feel better already. Bula!!!!!

The ODT editorial sums up the issue of Fonterra’s handling of the poisoned milk in China:

Quality control where food products are concerned is simply unarguable and the damage done for the lack of it to Fonterra’s good name by this tragic event suggests the company needs to have taken, and to continue to take, a great deal more direct interest in such partnerships.

Fonterra CEO  Andrew Ferrier is right that the poisoning was sabotage and that the problem spread far wider than his company. But there were concerns about Chinese food safety standards so Fonterra should have been far more cautious and rigorous about quality control with Sanlu in which it has a 43% stake.

If it couldn’t have prevented the problem it should have gone public far sooner after it was recognised. If they weren’t able to do that in China they could have done it here so that in spite of the repressive controls on media there the word would have got out.

Public health ought to have been their first priority and if they hadn’t wanted to risk business relationships in China by doing it openly they could have done it quietly then put the blame on our media. But they should have done it as soon as possible after concerns were raised.

Whether that would have saved any babies’ lives and lessened the severity of or prevented illness in others is a moot point. But there would have been no hesitation about a public recall of contaminated infant milk formula here and there shouldn’t have been there.

The only way Fonterra, or any other New Zealand company which goes in to business overseas, can safeguard its reputation, is to ensure that it has the same safety standards and concern for public health there as it does here.

. . . until election day and the parties which opposed the Electoral FInance Act have managed to abide by it but those which supported it continue to breach it.

More than a third of women questioned in a Research New Zealand poll  believe they don’t have equal rights.

However, the poll found that overall, 72 per cent of those interviewed believed that men and women shared equal rights.

Equality isn’t achieved just by enshrining rights in law it’s also requires a change of attitude and it may be easier to enact the former than to achieve the latter with some people.